The TPP promises to boost the economies of its 12 countries, but the gains won't be even. 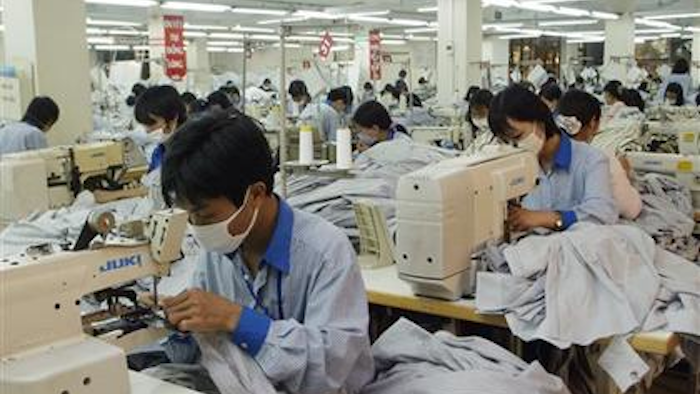 An ambitious Pacific Rim trade deal anchored by the U.S. promises to boost the economies of its 12 participating countries by opening their markets to one another, but not all the gains will be spread evenly.

Among the biggest winners of the Trans-Pacific Partnership is Vietnam, where booming garment and shoe industries are poised to benefit from the elimination of tariffs in the United States and other major importing nations.

Experts say Japanese car and auto parts makers and Malaysia's electronics and semiconductor industry will also benefit from the trade deal, which was agreed on Monday after more than five years of negotiations.

The pact, which still needs ratification from individual countries, aims to liberalize commerce and tighten labor and environmental standards across member nations that account for two-fifths of the world economy.

The Trans-Pacific Partnership is central to President Barack Obama's policy of greater engagement with Asia to offset rising Chinese influence in the region. In theory, China could eventually join the pact if it met environmental and labor standards. As a result of being outside the club, Chinese manufacturers are likely to see some trade opportunities slip away, particularly as more Asian countries sign up.

Many of the benefits of the free trade deal will flow to Vietnam, where the economy has been growing at a decent clip as manufacturers beef up their presence.

"This is really transformational for Vietnam," said Rajiv Biswas, Asia Pacific chief economist at IHS Global Insight. "They're going to get a very big advantage over many other exporters of garments into the U.S. market," which currently imposes a 17 percent duty on clothing imports, he said.

Vietnam's gains are likely to come at the expense of jobs in Mexico's apparel and footwear industry as well as the last outposts of those industries in Canada and the U.S. Proponents of the deal say those three countries will see benefits in other industries such as agriculture, machinery and electrical equipment.

The trade pact, combined with a recently signed European Union free trade agreement, is expected to accelerate foreign investment into Vietnam. Manufacturers such as Samsung Electronics have been setting up new factories in Vietnam for several years, underscoring its rising attractiveness over China, a longtime global manufacturing powerhouse that's been hit by surging labor costs.

Biswas and other analysts say Vietnam's economy will get the biggest proportionate boost because of its relatively small per-capita GDP. Other countries signing up to the deal include Australia, Brunei, Canada, Chile, Mexico, New Zealand, Peru and Singapore.

By 2025, Vietnam's economy will be 11 percent, or $36 billion, bigger than without the trade deal while exports will be 28 percent larger, according to a Eurasia Group report released in July.

"This percentage increase dwarfs the gains made by any other country," the report said. Vietnam will become the "preferred destination" for low-cost manufacturers looking to stay competitive, with industries relying on cheap labor, chiefly clothing, shoes and textiles, set to reap the biggest gains, it said.

Manufacturers, especially garment makers, are scrambling to move part of their production to Vietnam in anticipation that the deal will require sourcing materials from participating countries.

"What we're now seeing is that some of the upstream parts of manufacturing, yarn, fabrics is now shifting to Vietnam as well, so that they're getting a more significant part of the total output. So there's a lot of positioning going on right now," said Biswas.

Hong Kong-based contract garment maker Lever Style, whose clients include Hugo Boss and J. Crew, has been shifting production from southern China to Vietnam in recent years. The trade pact "will encourage us to migrate even more production," Chairman Stanley Szeto said.

However, he said its effect on the company's bottom line would be neutral and "possibly negative."

"We will try to gain volume in Vietnam but we won't be most competitive on foreign soil, while we'll for sure lose volume on our home turf in China. Buyers will probably insist on capturing all the duty savings, so I don't expect much margin benefit for suppliers," Szeto said.

Malaysia is also poised to benefit. The country's exporters will get a competitive advantage over regional rivals by getting greater market access to the U.S., Canada and Mexico, Trade Minister Mustapa Mohamed said Wednesday.

Malaysia's textile and clothing industries will benefit, but higher value industries such as semiconductors and integrated circuits will get an even bigger boost, analysts say.

Malaysia is a key player in global production for the electronics industry and the deal will expand its presence, the Eurasia Group said. Malaysia's economy will be 5.6 percent bigger in 2025 thanks to the agreement, it said.

Japan wins by widening access to big foreign markets for its auto industry, a key part of Asia's second biggest economy. Eurasia estimates $105 billion will be added to Japan's GDP by 2025.

But the pact's role in helping Prime Minister Shinzo Abe pursue structural reforms as part of his "Abenomics" program to jumpstart growth after two decades of stagnation may be even more important.

"Perhaps most significantly, the wider economy should benefit as previously protected sectors are exposed to competition," Marcel Theilant of Capital Economics said in a report.