A congressional vote on the pact is not expected to occur until well into next year. 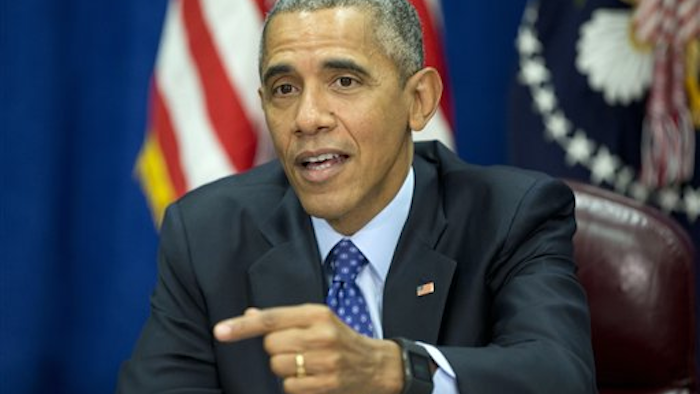 Negotiations over the complex trade deal took more than five years. On Tuesday, President Barack Obama began what may be a similarly difficult task — selling the Trans-Pacific Partnership to Congress and the American public.

Obama met with business and agricultural leaders at the Department of Agriculture. The site of the meeting reflects the urgency that farm groups have attached to the deal to remove tariffs and other trade barriers that would increase exports ranging from meat and poultry to grains and cotton.

Obama emphasized that the deal would eliminate or reduce more than 18,000 tariffs that participating countries impose on U.S. exports.

"We are knocking down barriers" and providing American businesses and workers with access to new markets," Obama told reporters at the conclusion of the closed-door meeting. He also said the pact has strong labor standards that will, among other things, prohibit child labor.

Leaders of trade groups representing the film, travel and technology industries were among those who attended the meeting with Obama and Agriculture Secretary Tom Vilsack.

"Under this agreement, rather than places like China, we're rewriting the rules for the global economy," Obama said.

It will be weeks before the full scope of the agreement announced Monday is known, but several labor groups are worried that it will result in American jobs sent to countries with lower wages and less stringent labor and environmental standards. A congressional vote on the pact is not expected to occur until well into next year, providing the unions with the chance to maximize leverage with lawmakers coveting their support.

The president has to wait 90 days before signing the pact, and only then will Congress begin the process of voting on it. Approval of the deal would give Obama a legacy-defining victory. To achieve a victory, Obama will need help from Republicans and will need to overcome doubts from a key Democratic constituency. In the hours after the trade deal was announced, some union leaders made clear that a candidate's stance on the Trans-Pacific Partnership will determine whether he or she can expect support. While unions have lost political clout as their numbers have declined, their political action committees donated more than $60 million to campaigns during the 2012 elections. About 90 percent of that money went toward Democratic candidates, according to the Center for Responsive Politics.

Chris Shelton, president of the Communications Workers of America, whose members include customer service reps and computer technicians, said the union will "hold accountable those members of Congress who support this giveaway to the 1 percent."

Tom Buffenbarger, president of the International Association of Machinists and Aerospace Workers, said, "This is a very, very serious and dangerous proposal, and those who would see fit to simply fall for another trade deal, thinking it is good for America, they will incur our dedicated effort to unseat them."

Buffenbarger said his comments applied to the congressional races. In the presidential race, his union has already endorsed Hillary Rodham Clinton. It's unclear where Clinton will come down on the trade agreement, but Buffenbarger said the endorsement stands.

"Wall Street and big corporations just won a big victory. Now it's on us to stop the #TPP from becoming law," Sanders tweeted.

Another Democratic candidate, former Maryland Gov. Martin O'Malley, has been highly critical of the trade pact in recent months.

The TPP is designed to encourage trade among the United States, Australia, Brunei, Canada, Chile, Japan, Malaysia, Mexico, New Zealand, Peru, Singapore and Vietnam. The pact would reduce tariffs in the participating nations in a bid to open markets.

"American workers should be skeptical of the specifics of this new trade agreement. Past trade deals like NAFTA have hollowed out America's manufacturing base and shipped thousands of American jobs overseas," said Rep. Dan Kildee, D-Mich.

As some of the expected opponents quickly objected, others needed to advance the deal voiced some caution. Members of the House Agriculture Committee have said they're concerned about a lack of access for rice farmers and the dairy industry.

"While I am encouraged to hear that U.S. livestock products such as beef and pork will see significant gains in market access, it will take a coalition of many to move TPP over the coming months," said committee Chairman Michael Conaway, R-Texas. "At this time, I am skeptical that these concerns were sufficiently addressed but will remain open-minded."