Find out more about Jason Dunn's keynote presentation at RAPID. 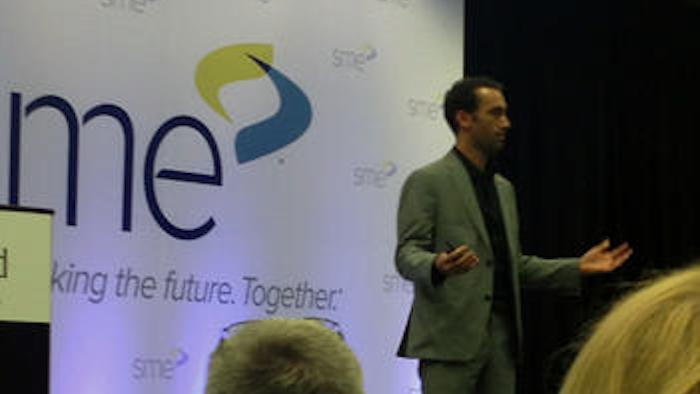 RAPID, a week long event featuring the latest technology in 3D printing, scanning, and additive manufacturing, is celebrating its 25th anniversary this week in Long Beach California. Jason Dunn, Made in Space CTO, kicked off the event Tuesday morning with his keynote presentation “Bringing Additive Manufacturing to Space.”

In 2014, Made in Space placed the first 3D printer on the International Space Station (ISS) to showcase the potential of onsite manufacturing in space, and now the company plans to install a permanent additive manufacturing facility on the ISS in 2015.

“In 2010, when we started the company, we decided that if we could put 3D printers into space, we could change the way space exploration is done,” explains Dunn.

Just last year, Barry “Butch” Wilmore, a Navy test pilot and space station commander, became the first person to print 3D objects in space. The 3D printer arrived at the ISS in September 2014 and was installed by Wilmore in November.

“A lot of the initial prints we did were to see how the 3D printer worked in space compared to a 3D printer on Earth,” says Dunn. “The first thing we printed in space was easy. We didn’t want it to be a failure – it was a nice flat plate.”

To print, the company sends commands to the printer directly from Earth. “When we’re done printing, we call [the astronaut] back to take the object out. It’s a magical experience for them,” says Dunn

On the initial mission, NASA allotted 21 objects to be 3D printed in space, a wrench being the 20th object printed. Wilmore commented shortly after the wrench head was printed that he would love to have his ratchet.

“So we convinced NASA to make the 21st print a ratchet for the wrench,” says Dunn. “In fact, the 21st print became the first time we uplinked a digital file to the space station.”

It took Made in Space about a day to design the ratchet, and after it was sent to NASA for approval. Once approved, NASA gave the company the ability to connect to the space station via their desktop computer. “We sent the ratchet file to NASA, and they uplinked the file to space station in a matter of minutes,” explains Dunn.

It took a little less than 2 hours for the ratchet to be printed. “We’re using the space station as a test bed to test out this technology,” explains Dunn.

Made in Space’s Vision of the Future

Dunn explained that he has always dreamed of building colonies on space. “It’s always been theoretically possible. It’s just a matter of passion and willpower,” he adds.

So why have we not colonized space yet? According to Dunn, space has a supply chain problem.

“Chemical propulsion is not that efficient. It takes a lot of energy to get our rockets into space. There has to be a more efficient way of doing this,” says Dunn. “One liter of water in space costs $10,000. When I look at this problem, it’s apparent that some sort of disruption is needed. That’s how we progress technologically.”

Currently, there are two main methods of getting objects from point A to point B. Either you make the supply chain faster or you decrease the distance between the points. However, Dunn suggests a new method, “What if you could build anything in space?”

Today, Made in Space is comprised of about two-dozen people. “We’re definitely the most concentrated group of people who focus on sustainable space exploration,” says Dunn. “In early 2011, we went to NASA and told them our idea for manufacturing in space. Their timeline was for 2025. We said we could do it a decade earlier.

“Unfortunately none of the commercial printers are designed for zero gravity," adds Dunn. "So we had to build printers that would work in zero gravity.”

In 2013, the company began to build the first 3D printer designed for space. After about a year of research and testing, it was ready for space in September 2014.

“Those initial prints have come back to earth on a SpaceX Dragon capsule. Now they’re in the lab being tested,” says Dunn. “We know the process works. Now we’re understanding how well the process works compared to on Earth.”

Made in Space is now working on developing a permanent additive manufacturing facility to send to the ISS later this year, and they already have quite a few groups signed up to use the printer. “What if countries that haven’t had enough money to build a space program could be a part of space exploration?” muses Dunn.

“Technology is just our tool. We are ultimately responsible for choosing the future we will build with it,” finishes Dunn. “I hope we can build cool futures together.”

PD&D Associate Editor, Kaylie Duffy, is attending the conference this week. You can follow her @kaylieannduffy.