Yet as Obama promotes the influx of foreign investment to the U.S., his administration and key members of Congress are also fretting over dozens of U.S. companies heading in the other direction. 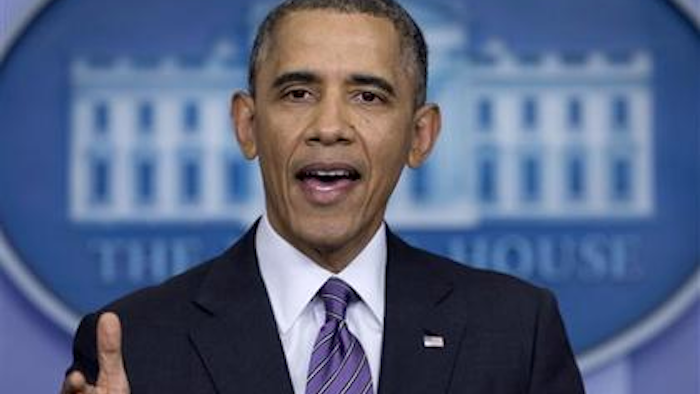 WASHINGTON (AP) -- While in Brussels for talks with European leaders in March, President Barack Obama held a little-noticed meeting with executives of a Belgian aerospace company. It was barely a footnote in a trip dominated by tensions with Russia over Ukraine.

But the meeting was the capstone of a lengthy courtship by the Obama administration and the state of Oklahoma to attract ASCO Industries to Stillwater, Okla., to build a new $125 million production facility.

The effort was part of an initiative called SelectUSA that Obama started in 2011 and expanded last year.

Obama this week is drawing new attention to the effort, convening business leaders Tuesday at the White House to advertise success stories in the face of continuing public anxieties over jobs and the economy.

Yet as Obama promotes the influx of foreign investment to the U.S., his administration and key members of Congress are also fretting over dozens of U.S. companies heading in the other direction. These businesses are merging with or acquiring overseas companies to change their address and gain tax advantages that can cost the federal government billions in tax revenues.

The most prominent example is Pfizer Inc.'s recent takeover attempt of British drugmaker AstraZeneca, a deal that if consummated would be the largest-ever foreign takeover of a British company. The potential acquisition would allow Pfizer to incorporate in Britain and thus limit its exposure to higher U.S. corporate tax rates. On Monday, AstraZeneca turned down Pfizer's latest offer of $119 billion, making the likelihood of a deal increasingly unlikely.

Pfizer's approach — called a corporate inversion — is the latest in a growing trend that could accelerate as corporate lawyers advise clients to get ahead of efforts in Washington to overhaul the tax system and close corporate loopholes. Companies that have created foreign shell corporations in recent years include familiar names like Tyco International and Ingersoll-Rand.

Though there is little chance of action this year, Republicans and Democrats generally agree that federal corporate tax rates, now at 35 percent, should be lowered while eliminating credits, exemptions and other tax advantages.

Still, the Obama administration's 2015 budget contained a specific proposal aimed at curtailing inversions and White House officials say such a fix would not necessarily have to be part of a broader overhaul.

In the Senate, Democratic Sen. Carl Levin of Michigan says he will propose legislation soon. Sen. Ron Wyden, the Democratic chairman of the tax-writing Senate Finance Committee, says he also has a plan to deal with inversions, but wants it to be part of more comprehensive tax legislation.

Under current law, a U.S. company that merges with a foreign entity can't benefit from a lower foreign tax rate unless the shareholders of the foreign company own at least 20 percent of the new merged business. Obama has proposed raising that threshold to 50 percent, with the goal of making them less attractive.

But Republicans like Sen. Orrin Hatch of Utah, the top Republican on the Finance Committee, and some corporate advisers say inversion transactions will continue as long as U.S. corporate tax rates remain the highest among industrialized countries and as long as the United States requires U.S. companies to pay taxes on any foreign cash that is brought back to the United States.

"That creates a very strong incentive for major U.S. companies to keep their cash earned overseas overseas" said Gordon Caplan, a partner in the New York law firm of Willkie Farr & Gallagher who specializes in mergers and acquisitions.

The growth in such foreign arrangements is creating an undertow against the upbeat picture that Obama is seeking to promote,

The figure, though, is nearly on track to meet Obama's goal of attracting $1 trillion in new foreign investments over the next five years.

Obama's SelectUSA program, initiated in 2011 and expanded last year, aims to make the U.S. outreach to foreign investors more efficient by relying on the federal government to help cities and states promote the U.S. overseas, even if it requires the highest ranking officials to make the pitch.

A survey last fall by the Boston Consulting Group, a global management consulting firm, found that 54 percent of executives of large U.S.-based manufacturing companies said they planned on or were considering moving production facilities back to the U.S. from China. That was up from the 37 percent a year earlier.

And the latest survey of confidence in foreign direct investment by A.T. Kearney, another global management consulting firm, found that the United States had regained the top spot as an investment destination for the first time since 2001.

Among the recent deals highlighted by the White House is a decision by a subsidiary of Germany-based Lufthansa to build an aviation maintenance and repair center in Puerto Rico. The deal, concluded last month, faced stiff international competition.