In a nation of mostly haves and have-mores, Swiss voters head to the polls Sunday to decide on a union proposal that would create a new nationwide minimum wage at 22 Swiss francs ($24.70) an hour — the world's highest. 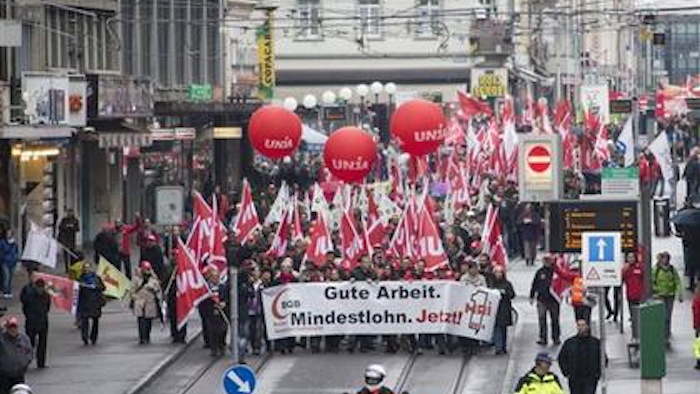 GENEVA (AP) -- In a nation of mostly haves and have-mores, Swiss voters head to the polls Sunday to decide on a union proposal that would create a new nationwide minimum wage at 22 Swiss francs ($24.70) an hour — the world's highest.

But the proposal "to protect equitable pay" is only the most prominent of several referendums on the ballot: Others include a controversial plan to buy new Swedish-made Gripen fighter jets for the Swiss Air Force and to impose a lifelong ban against convicted pedophiles working with children.

Most attention is focusing on the push to set a minimum wage at 4,000 francs ($4,500) a month for those working a 42-hour week. The Swiss Trade Union Federation has based its proposal on 2010 figures when the median wage was almost 6,000 francs monthly.

The union submitted the referendum in 2012 in keeping with Switzerland's tradition of direct democracy. Voters in the country who collect 100,000 signatures can force a binding referendum on any issue.

Groups representing Swiss employers are opposed to the plan to create a minimum wage that is more than three times the rate in the United States and more than double Germany's current proposal for 8.50 euros ($11.64) per hour as of 2017. Opponents say it would tinker too much with the economy and hurt businesses by causing production costs to rise.

Switzerland's seven-member Federal Council of ministers — which has relatively limited power over the 26 cantons (states) — doesn't support the creation of a minimum wage.

"A legal minimum wage is a bad way to help people with low incomes," the Council said in a statement. "There would be a high risk that jobs disappear ... It would be a greater help to those affected by providing them with jobs and supporting them with tax breaks and social policy measures."

Wages have to be high in the Alpine nation to keep up with what some surveys have found to be the world's highest prices. However, there is now a growing scrutiny over who earns what following criticism of "fat cat" bosses.

There was particular outrage last year at the news that the outgoing chairman of Swiss drugmaker Novartis AG, Daniel Vasella, was to receive a leaving package worth 72 million francs. Vasella later said he would forego his deal.

Unia, a Swiss trade union with over 200,000 members, gathered activists and organizers beneath a statue of an immigrant in Geneva to argue that "the fight against poverty" must include fast-food workers and coffee chains.