While the Seattle mayor is proposing to raise the wage to $15 in the coming years to the highest level in the nation, some activists say that's too slow and are threatening to take the issue to voters with a ballot measure that would force a raise sooner. 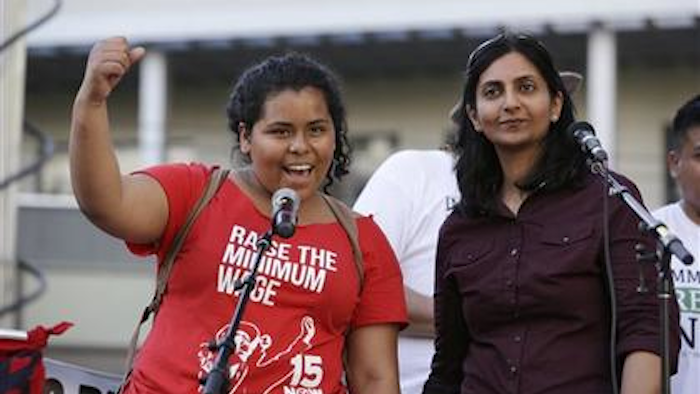 SEATTLE (AP) -- They've crowded into stuffy rallies at a Seattle union hall, protested in front of fast food restaurants, marched down city streets and implored city leaders to demand an immediate $15 an hour minimum wage hike for all employees.

"We're not patient!" a man shouted at a union hall rally, and the crowd cheered.

While the Seattle mayor is proposing to raise the wage to $15 in the coming years to the highest level in the nation, some activists say that's too slow and are threatening to take the issue to voters with a ballot measure that would force a raise sooner.

Accounting for inflation, "even in 10 years' time, workers still won't be at 15," said Kshama Sawant, the socialist City Council member and a leader of the group 15 Now.

As the plan is being debated by the council, businesses are sounding the alarm that raising the wage too quickly could hurt their revenue and force them to hire fewer workers or let go of some employees.

Minority chambers of commerce have banded together to argue that a quick hike to $15 would kill their family-run businesses. Their argument: Who is going to hire immigrants learning English for $15 an hour?

OneSeattle, a group made up of small and medium-size employers with the backing of large business organizations like the Washington Restaurant Association, says it supports a wage hike, but with some key caveats.

The group wants a phase-in and a temporary training wage. It also wants health care, commissions, tips and bonuses to be counted in total wages.

Mayor Ed Murray presented his plan, forged from an agreement among labor, business and nonprofit representatives. The group crafted a plan that 21 of the 24 members agreed on. It created a unified front for Murray to present to the city.

Murray's proposal gives businesses with more than 500 employees nationally at least three years to phase in the increase.

Those providing health insurance will have four years to complete the move. Smaller organizations will be given seven years, including a consideration for tips and health care costs over the first five years of the phase-in.

"If you leave the negotiating table with both sides being a little unhappy, you've got a pretty good deal because it's sustainable," David Freiboth of the King County Labor Council told City Council members, invoking an old labor saying.

Once the $15 wage is reached, future annual increases will be tied to the consumer price index.

"It's the least offensive of the imperfect solutions," said Bob Donegan, CEO of Ivar's, a popular seafood restaurant in Seattle. Donegan opposed the successful $15 a ballot measure in neighboring city of SeaTac.

Last month, Minnesota raised the state's guaranteed wage by more than $3, to $9.50, by 2016. California, Connecticut and Maryland have passed laws increasing their respective wages to $10 or more in coming years.

The current minimum wage in Washington state is $9.32 an hour.

Sawant's group will attempt to plead its case to City Council members while gathering the 30,000 signatures needed to put the charter amendment on the ballot.

The group's proposal would create an immediate wage hike for large businesses and a three-year phase-in for organizations with fewer than 250 full-time employees.

If 15 Now and Sawant go ahead with a ballot measure, business groups will likely file their own, said businessman Howard S. Wright III, who is the CEO of Seattle Hospitality Worldwide, an events management conglomerate

Seattle voters would then be faced with competing ballots.

Murray warned the two efforts would lead to a "mini version of class warfare."