The Congressional Budget Office estimates that a Senate Democratic proposal gradually boosting the minimum wage to $10.10 hourly would force businesses to spend $15 billion more in salaries in 2017. 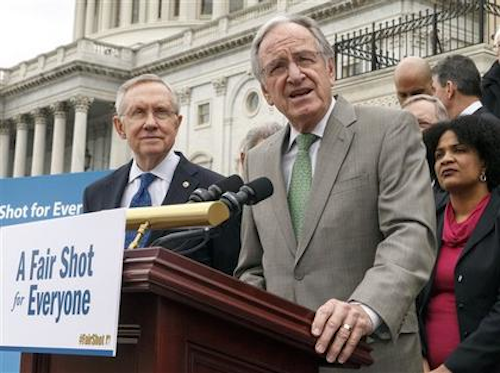 WASHINGTON (AP) -- The Congressional Budget Office estimates that a Senate Democratic proposal gradually boosting the minimum wage to $10.10 hourly would force businesses to spend $15 billion more in salaries in 2017.

The nonpartisan budget office says the increase would impose $1 billion in higher salary costs on state and local governments in 2017, when in full effect.

The raise would increase federal salaries by just $2 million over the decade ending in 2024. The federal government has fewer than 4,000 workers earning under $10.10.

The Senate is expected to debate the legislation soon. Republicans seem likely to block it.

The budget office earlier estimated the increase would mean $31 billion in higher 2016 earnings for low-paid workers — including many not directly covered by the proposal.