December U.S. manufacturing technology orders totaled $491.89 million according to AMT - The Association For Manufacturing Technology. This total, as reported by companies participating in the USMTO program, was up 9.9 percent from November and up 11.8 percent when compared with the total of $439.90 million reported for December 2012.

AMT – The Association For Manufacturing Technology 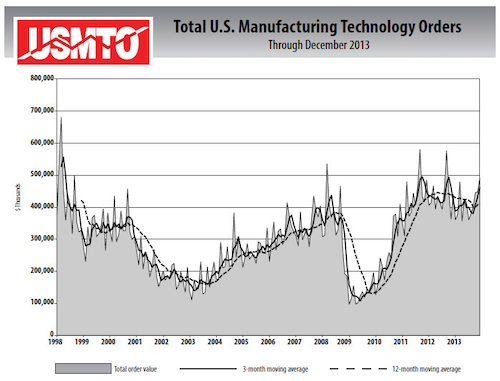 December U.S. manufacturing technology orders totaled $491.89 million according to AMT - The Association For Manufacturing Technology. This total, as reported by companies participating in the USMTO program, was up 9.9 percent from November and up 11.8 percent when compared with the total of $439.90 million reported for December 2012. With a year-end total of $4,939.58 million, 2013 was down 5.1 percent compared with 2012.

“With a strong finish to 2013 for manufacturing technology orders, plus strong reports for durable goods, capacity utilization, and PMI, there is plenty of favorable momentum for the industry going into 2014,” said Douglas K. Woods, AMT President. “The average age of corporate fixed assets is at almost 22 years, and interest rates are historically low. This one-two punch is creating a ripe atmosphere for investment in capital equipment, which we anticipate will translate into more great news for manufacturing growth.”

At $45.46 million, December Southeast Region manufacturing technology orders were 20.7 percent less than the December 2012 total. Year-end orders stood at $452.20 million, down 16.7 percent when compared with 2012.

With a year-end total of $924.26 million, 2013 North Central-West Region manufacturing technology orders were off 10.1 percent when compared with 2012.

The South Central Region manufacturing technology orders 2013 year-end total of $749.06 million was down 13.2 percent from the year-end total for 2012.

AMT – The Association For Manufacturing Technology represents and promotes U.S.-based manufacturing technology and its members—those who design, build, sell, and service the continuously evolving technology that lies at the heart of manufacturing. Founded in 1902 and based in Virginia, the association specializes in providing targeted business assistance, extensive global support, and business intelligence systems and analysis. AMT is the voice that communicates the importance of policies and programs that encourage research and innovation, and the development of educational initiatives to create tomorrow’s Smartforce. AMT owns and manages IMTS – The International Manufacturing Technology Show, which is the premier manufacturing technology event in North America. The USMTO report is compiled by AMT and all data in the report is based on the totals of actual data reported by companies participating in the USMTO program.