French Leader To CEOs: Invest More To Get Tax Cut

Companies in France pay the highest payroll taxes in Europe. A promised $41 billion payroll tax cut is a centerpiece of Hollande's new bid to keep the economy from sliding back into recession and bring down nearly 11 percent unemployment. 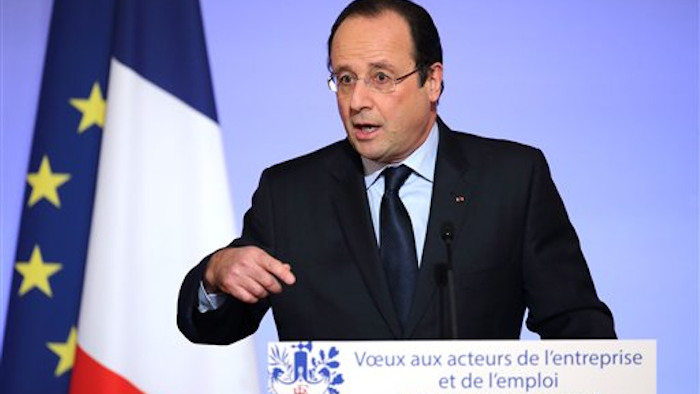 PARIS (AP) -- French President Francois Hollande told top companies that they have to promise to hire and invest more if they want to benefit from a promised cut in payroll taxes.

Companies in France pay the highest payroll taxes in Europe. A promised 30 billion-euro ($41 billion) payroll tax cut is the centerpiece of Hollande's new bid to keep the economy from sliding back into recession and to bring down unemployment, which is nearly 11 percent .

In a speech Tuesday to French CEOs, Hollande said companies have to promise to hire a fixed number of workers in exchange. He said it's up to unions and employers to decide how many, but the outcome of their negotiations "must be clear and specific and measurable, therefore verifiable."

"Companies must commit to investing more in France and moving jobs back" to France from cheaper sites abroad, he said.

Employers and unions will negotiate this spring so that the government can turn the deal, which he calls a "responsibility pact," into law by summer, he said.

Jean-Pierre Mailly, head of the hard-left Workers' Force union, criticized a "completely unbalanced deal. You announce tax cuts but what the companies might give in exchange is very unrealistic."

Hollande announced last week the tax cut to reduce the burden on companies and independent workers by 30 billion euros by 2017. He came under immediate criticism from fellow Socialists for being too friendly to big business. He also promised to cut 50 billion euros ($68 billion) in public spending over the years 2015-2017.