The rapid hiring that made 2014 a stellar year for job gains is showing no sign of slowing down. U.S. employers advertised the most job openings in nearly 14 years in November, the Labor Department said Tuesday. That suggests businesses are determined to keep adding staff because... 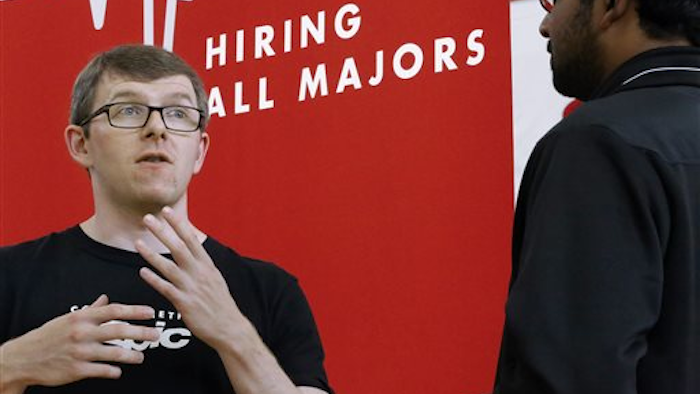 The rapid hiring that made 2014 a stellar year for job gains is showing no sign of slowing down.

U.S. employers advertised the most job openings in nearly 14 years in November, the Labor Department said Tuesday. That suggests businesses are determined to keep adding staff because they are confident strong economic growth will create more demand for their goods and services.

Job openings rose 2.9 percent to 4.97 million in November, the most since January 2001. More job vacancies generally lead to more hiring. Employers have been slow to fill their openings for most of the recovery, but that started to change last year as companies ramped up their overall hiring.

A second report Tuesday from the National Federation of Independent Business, a small business group, added to the positive outlook. An NFIB monthly index of small business optimism rose in December to its highest level since October 2006. Business owners surveyed by the group were also more likely to add jobs than at any point since the recession ended in June 2009.

"There's no question that small business owners are feeling better about the economy," NFIB chief economist Bill Dunkelberg said. "If they continue to feel that way 2015 could be a very good year."

Job openings have soared over the last year. The fact that they continue to rise suggests companies still want to hire even after adding a large number of jobs in 2014. With the unemployment rate lower, employers may be forced to offer higher pay in order to attract the workers they need, though there is little sign that wages have started to rise yet.

"The surge in the number of job openings since last spring is nothing short of spectacular," Ian Shepherdson, chief economist at Pantheon Macroeconomics, wrote in a note to clients. Should such increases continue, "the greater is the chance the wage pressures intensify."

Yet the job market's improvement hasn't yet boosted hourly pay by much. That has flummoxed economists, who generally expect pay to rise when the unemployment rate falls, as businesses compete for a smaller pool of potential employees.

The two reports released Tuesday "suggest that labor market conditions are even stronger than we previously believed and leaves the slowdown in wage growth looking even odder," said Paul Ashworth, chief U.S. economist at Capital Economics.

A measure of average hourly pay actually fell in December, according to Friday's monthly jobs report. Wages have only increased 1.7 percent in the past year. That's barely ahead of the 1.3 percent inflation rate.

Friday's employment report also showed that employers added a net total of 252,000 jobs in December, capping the best year for hiring since 1999. Nearly 3 million more people started earning paychecks in 2014. That drove the unemployment rate down to 5.6 percent, the lowest level in more than six years.

Tuesday's data on job openings is from the Job Openings and Labor Turnover survey, or JOLTS, which provides a more detailed look at the job market than the monthly employment report. It includes figures for overall hiring, as well as the number of quits and layoffs. The monthly jobs figures are a net total of job gains or losses.

Overall hiring fell in November, Tuesday's report showed. Still, the drop came after two months of increases that had left hiring near a seven-year high in October.

The number of people quitting their jobs also dropped, after reaching six year-highs in September and October. More quitting is a good sign because people usually leave jobs when they have already secured newer, typically higher-paying, ones. Rising quits also suggests Americans are more confident they can find jobs.

Federal Reserve Chair Janet Yellen has cited the levels of quits and hires as key indicators of job market health. She and other Fed officials are monitoring those trends as they consider when to raise short-term interest rates from near-zero levels. Most economists forecast that won't happen until the middle of this year.