This isn't explained in Econ 101. Month after month, U.S. hiring keeps rising, and unemployment keeps falling. Eventually, pay and inflation are supposed to start surging in response. They're not happening. Last month, employers added a healthy 252,000 jobs — ending the best year of hiring since... 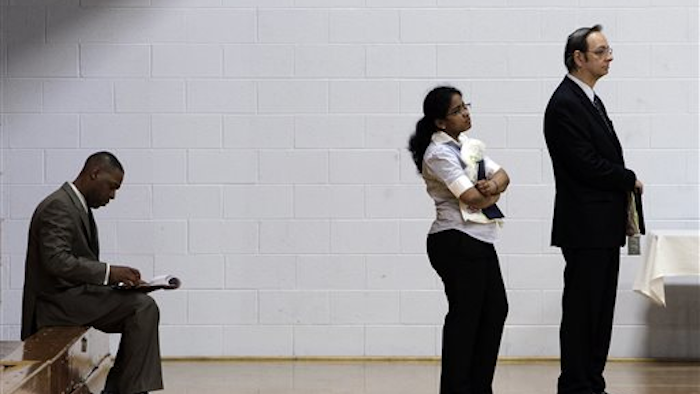 Last month, employers added a healthy 252,000 jobs — ending the best year of hiring since 1999 — and the unemployment rate sank to 5.6 percent from 5.8 percent. Yet inflation isn't managing to reach even the Federal Reserve's 2 percent target rate. And paychecks are barely budging. In December, average hourly pay actually fell.

Economists are struggling to explain the phenomenon.

"I can't find a plausible empirical or theoretical explanation for why hourly wages would drop when for nine months we've been adding jobs at a robust pace," said Patrick O'Keefe, chief economist at consulting firm CohnReznick.

Normally, with unemployment this low, the Fed would raise its benchmark interest rate to prevent inflation from spiking and the economy from overheating. Not this time. Though the Fed's record-low rates have helped support the economy since the 2008 financial crisis, those low rates haven't met their other goal of raising wages and inflation to normal levels.

As long as inflation stays consistently below its target, the Fed might feel pressure to delay a rate increase beyond midyear, when most economists have predicted a hike. Thanks in part to plunging oil prices, many economists now envision even less inflation this year than in 2014.

When the U.S. economy last enjoyed a similar hiring binge, in 1999, average wages climbed 3.6 percent, compared with 1.6 percent last year, according to the government.

Though the unemployment rate is back to a nearly healthy level, many other measures of the job market remain subpar.

There are still 6.8 million people working part time who can't find full-time jobs, up from 4.1 million before the recession. Each of those workers potentially competes with the unemployed for full-time work, thereby holding down wages.

And there are 2.3 million people who have recently stopped looking for work, some of them because they grew discouraged about their prospects. Others chose to return to school or to care for relatives. That's up from 1.3 million before the recession.

And a broader gauge of unemployment, which includes the officially unemployed as well as involuntary part-time workers and those who've stopped looking, is 11.1 percent. That figure has improved since the recession, but not as much as the official unemployment rate has.

Jennifer Durham, a vice president at the 800-fast-food restaurant chain Checkers, says it plans to add 50 to 60 restaurants this year. Each should employ 25 to 30 people.

But Checkers hasn't faced much pressure to raise wages for hourly workers. "There's no shortage of applicants," Durham said.

The end of long-term unemployment benefits, which provided up to 99 weeks of aid until they expired a year ago, may also be contributing to lower wages, said Daniel Alpert, managing director at Westwood Capital, said.

That's because some of the unemployed have likely had to take lower-paying jobs. Retail or restaurant jobs that pay at or near minimum wage don't provide much more spending power than unemployment benefits did, Alpert added. That means the new jobs won't raise inflation much if workers can't afford to spend much more than they did when they were unemployed.

What's happened in the auto industry reveals much about how the economy has been transformed — and why a nearly normal 5.6 percent unemployment isn't igniting wages.

Sales of new cars last year reached 16.5 million, the best performance since 2006. But the gains have yet to restore every auto job lost to the recession — let alone expand the industry's employment over the past eight years. The number of autoworkers remains about 160,000 shy of pre-recession levels of more than 1 million.

The reason: Companies fear returning to the days when they had too much factory capacity. So they're squeezing more production out of less capacity. Emerging from the recession, automakers reconfigured factory floors and added robots to produce more vehicles from fewer plants and fewer workers.

What's more, the United Auto Workers union agreed to wage cuts in an effort to help General Motors, Ford and Chrysler. New hires started at around $16 an hour, about half of what longtime workers earn.

Roughly a quarter of Detroit's factory workers now make the entry-level wage. Even longtime UAW workers haven't had an hourly pay raise since 2007, though they've received annual profit-sharing checks equaling about $4 an hour.

Similar trends have emerged at other factories and in other industries. O'Keefe notes, for example, that retailers are selling more goods than before the recession yet still employ fewer workers.

Though hiring has picked up in higher-paying industries, in many cases, wages are still lagging. Average pay at heavy goods manufacturers rose only 0.7 percent last year, less than half the economy-wide average. Pay for transportation and warehousing workers rose just 0.9 percent.

Since the start of graduation season in May, employers have hired an additional 1.67 million college graduates — nearly 60 percent of all jobs added last year. In the past year, the number of 25-to-34 year-olds with jobs has climbed a solid 2.5 percent.

Because so much hiring has disproportionately occurred in recent months, Wells Fargo chief economist John Silvia figures that wages might be held down because many lower-paid entry-level workers are finding jobs. Their influx cuts into average wages while simultaneously reflecting the strength of job growth.

"Given that we've hired so many people in the last two or three months, you're bringing in a lot of new workers who will not be paid as well as experienced workers," Silvia said.

Dig a bit deeper and you find other age-based pressures: The number of workers older than 55 climbed an impressive 3.4 percent last year. But those employees likely maxed out their salary potential years ago and are unlikely to enjoy sharp pay hikes. The number of employed 35-to-54-year-olds — the age group most likely to be in their peak earnings period — rose less than 1 percentage point in the past year.

No matter how much the U.S. economy improves, American workers still face competition from billions of workers in China, India, Eastern Europe and elsewhere who weren't part of the global economy a decade or two ago.

That most of those economies, as well as Japan and the rest of Europe, are stumbling only intensifies the competition for jobs. Weak growth overseas has lowered interest rates and inflation — and therefore tempered pay growth — in many of the United States' competitors. That means U.S. workers face continued low-wage competition.

At the same time, the dollar's value is rising against other currencies, thereby making U.S. goods costlier overseas. This limits the ability of U.S. workers to secure higher pay. Many U.S. companies can move operations overseas.