It's the D-word that's pushing the European Central Bank into a corner. But it's not debt — Europe's main economic problem in recent years — that is driving speculation the ECB will switch on the printing press to help the economy. It's... 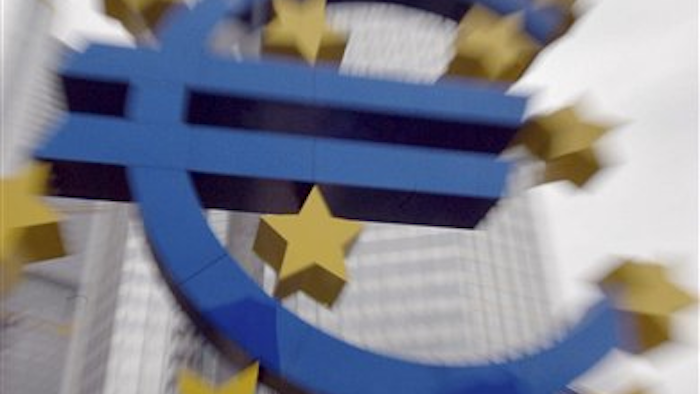 It's the D-word that's pushing the European Central Bank into a corner.

But it's not debt — Europe's main economic problem in recent years — that is driving speculation the ECB will switch on the printing press to help the economy.

At first glance, deflation, which is generally defined as a sustained drop in prices, sounds good — getting goods cheaper surely warms the heart of any consumer.

The problem lies when prices fall consistently over time, as opposed to temporary declines, which can give economic activity a boost. The recent sharp fall in the oil price, for example, is expected to help growth.

Longer-term deflation encourages people to put off spending and can prove difficult to reverse because it requires altering people's expectations. It can lead to years of economic stagnation, as in Japan over the past two decades, or at worst, into something more pernicious, such as the Great Depression of the 1930s.

The determination to avoid another Great Depression was largely behind the U.S. Federal Reserve's activist response to the financial crisis of 2008 and the ensuing recession.

Former Fed Chairman Ben Bernanke spent much of his academic career studying deflation and in a major speech in 2002 — before taking the helm — he laid out a strategy to counter deflation should it rear its head again. Much of his prescription was put into action during the financial crisis — slashing interest rates to near zero and injecting new money into the economy through a program of government bond purchases.

The ECB has long held off the last bit — the large-scale bond-buying — but as the risk of deflation grows in the 18-country eurozone, it is finally considering it.

"Sustained deflation can be highly destructive to a modern economy and should be strongly resisted," Bernanke said in his speech. "Prevention of deflation is preferable to cure."

Deflation has been a rarity in modern economic times compared with high inflation, in which the price of goods spirals higher. However, both can cause economic havoc.

A consistent drop in prices chokes an economy mainly by enticing consumers to delay big purchases beyond everyday needs such as food and energy in the knowledge that they will cost less down the line. Keeping money under your mattress suddenly becomes an appealing investment strategy.

And faced with lower prices, businesses also make less profit and start looking to reduce costs. That means job losses, wage cuts and a growing reluctance to invest and innovate. The economy is weighed down further, prompting businesses to cut costs further, exacerbating the deflationary spiral.

Deflation can also worsen public debt and that's not what Europe needs. Though the nominal amount of debt remains the same, it in effect grows because prices are lower.

Europe on the Deflation Edge

Unlike the Fed and many other major central banks, the ECB has held off massive bond-buying to fight deflation, not least because it is technically more difficult across a bloc of countries.

However, ECB President Mario Draghi has hinted that the bank is ready to launch such a program, called quantitative easing, if needed to get inflation back toward target, though most analysts do not expect a big announcement at the next meeting on Thursday.

The eurozone is not witnessing deflation at the moment though several member countries, notably Greece, are seeing sustained price falls. At 0.3 percent in the year to November, consumer price inflation in the eurozone is perilously low and way below the ECB's target of just under 2 percent.

In effect, a central bank creates new money when doing quantitative easing. By buying the bonds, it can keep a lid on longer term interest rates and the value of the currency, helping exporters. And financial institutions, awash with cash after selling their bonds, can lend the money on to households and businesses. Overall, the hope is such a program stokes activity and gets rid of the deflation.

In Germany, the idea is met with caution.

As well as conjuring up images of the 1920s hyperinflation, there are more immediate concerns — bond-buying could lead to German taxpayers being lumbered with the debts of countries like Greece, Italy and Portugal. A belief in sound finances is as German as Bavarian beer.

"What Germans are worried about right now is the cancellation of southern European debt," said Albrecht Ritschl, a professor of economic history at the London School of Economics.

What historical bouts of deflation show — from the U.S. experience in the 1930s to Hong Kong after the Asia crisis of 1997 — is that, once embedded, it can be awfully difficult to get rid of.

Cue Bernanke's warning that preventing deflation is better than curing.

In theory, the best option available to a central bank to deal with deflation is to cut interest rates. Lower borrowing costs can boost consumption and help increase demand for credit.

But when rates are already at rock-bottom levels, as they are now in the eurozone, other methods have to be pursued. And that is where bond-buying comes into play. Its effectiveness, however, is a matter of debate.

Proponents say it helped in the U.S. and Britain, where growth has rebounded. Not so in Japan, the country that can best testify to deflation's stickiness. Two decades on from when deflation took root following a stock and real estate collapse, Japan is still trying to rid itself of deflation.

Over the past couple of years, Prime Minister Shinzo Abe has launched Japan's most sustained effort to combat deflation. So-called "Abenomics" involves huge amounts of stimulus from the Bank of Japan, heavy government spending and wide-ranging economic reforms.

The jury is out on whether it will work — Japan fell back into recession in the third quarter.