Russia Warns Of Recession Next Year

The Russian government has for the first time acknowledged that the country will fall into recession next year, battered by the combination of Western sanctions and a plunge in the price of its oil exports. The news caused markets to drop, with the ruble sliding back toward a... 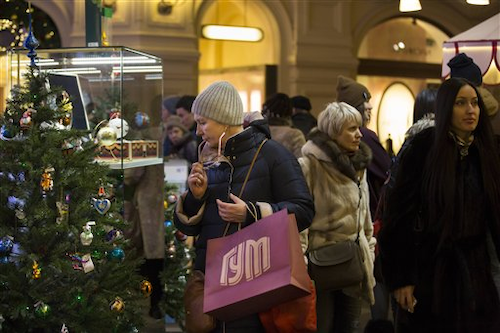 The Russian government has for the first time acknowledged that the country will fall into recession next year, battered by the combination of Western sanctions and a plunge in the price of its oil exports.

The news caused markets to drop, with the ruble sliding back toward a record low against the dollar.

The economic development ministry on Tuesday revised its GDP forecast for 2015 from growth of 1.2 percent to a drop of 0.8 percent. Russians are expected to take hit, with disposable income seen declining by 2.8 percent against the previously expected 0.4 percent growth.

Russia's economic outlook is at the mercy of the global market for oil, a key export that finances the bulk of the state budget. Sanctions over Moscow's role in eastern Ukraine are making things worse, hurting Russian banks and investment sentiment in particular.

The national currency, the ruble, has dropped by more than 40 percent this year as the economic troubles mounted. That in turn risks spawning more problems, such as a spike in inflation that would pinch consumers.

The release of the forecast on Tuesday afternoon reversed a modest rally in the Russian market, bringing the ruble 3.5 percent lower against the dollar, to 53 per dollar.

Finance Minister Anton Siluanov attempted to talk up the market, noting the new forecast is too gloomy. He told Russian news agency it is only "an early estimate and it is still being discussed."

Siluanov said the ruble is oversold and its current exchange rate would correlate to the oil price of $60 per barrel. The global price of oil, Brent, traded around $70 a barrel on Tuesday.

Russia's economic stability is important for the region. It is a major trading partner for Western Europe, selling raw materials and oil and gas to the West and importing consumer goods and foodstuffs. European agricultural producers reported big losses following the Kremlin's ban on some imports. A weaker economy and a weaker ruble would also mean that fewer Russians will be traveling abroad and spend their money there.

Russia's public finances may withstand some short-term turmoil — the government has a solid balance sheet, extremely low sovereign debt and sizeable reserves in foreign currencies. It is the wider economy that is likely to suffer more.

"The real damage from the collapsing ruble and oil price is to investment and growth," said Chris Weafer, senior partner at Moscow-based Macro-Advisory, said in a note to investors.

"Russia is a non-investible country for all but the bravest of hedge fund investors right now, and will remain in this category until both the ruble and oil stabilize at minimum."