U.S. factories were slightly less busy in November, as production and hiring slowed, though the level of activity remained strong. The Institute for Supply Management, a trade group of purchasing managers, said Monday that its manufacturing index slipped to 58.7 last month from 59 in October. Any... 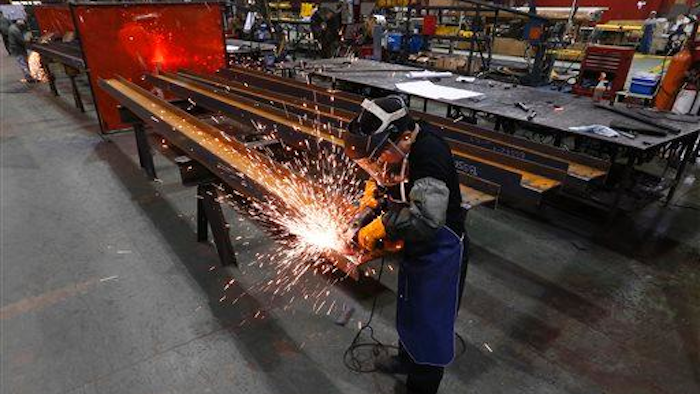 U.S. factories were slightly less busy in November, as production and hiring slowed, though the level of activity remained strong.

The Institute for Supply Management, a trade group of purchasing managers, said Monday that its manufacturing index slipped to 58.7 last month from 59 in October. Any reading above 50 signals expansion. October's figure matched a three-year high reached in August.

Manufacturing has been a key driver of growth this year, as Americans have ramped up their purchases of autos and electronics. Yet other manufacturing data has pointed to a recent slowdown in output, and many economists said Monday that factories are probably not growing as fast as the ISM's survey suggests. The index has topped 56 since June, up from an average of just 53.9 last year.

"Although we remain optimistic about the outlook....we're not convinced that conditions are quite as good as the ISM implies," Paul Dales, senior economist at Capital Economics, said in a note to clients.

The U.S. figures are also far ahead of many overseas economies. A European manufacturing index fell to 50.1 in November, the lowest in 17 months and just barely in expansion territory. And manufacturers in China are also barely growing, according to a survey by the bank HSBC Corp. Brazil's manufacturing sector contracted for the seventh time in eight months.

Yet a measure of U.S. export orders rose in November, the ISM said, surprising many economists. In addition to slowing overseas growth, the dollar has strengthened, which makes U.S. goods more expensive overseas.

A measure of new U.S. orders rose and order backlogs jumped, both signs that output will likely remain solid in the coming months. A gauge of hiring dipped, but still pointed to steady job gains among manufacturing firms.

Lower oil prices are providing a big boost, the ISM found. Its measure of prices paid for raw materials plummeted to 44.5, the lowest in two years. Cheaper oil benefits plastic manufacturers, who use oil as an ingredient, and steelmakers and other manufacturers who use it for heating and shipping.

That's raised concerns that economic growth could slow in the final three months of this year. The economy expanded at a 4.25 percent annual rate in the April-June and July-September quarters. That was the best six months of growth for the U.S. economy since 2003.

But there have been recent signs that growth is slowing. Consumer spending rose only modestly in October. Many economists now forecast growth will slide to a 2.5 percent rate in the current October-December quarter.

But the additional jobs have yet to spur meaningful wage growth.