Minnesota's unemployment fell to an eight-year low in October, dropping to less than 4 percent, and the state has added nearly 50,000 jobs so far this year, according to state employment data released Thursday. Marking a steady trend in the state, seasonally adjusted employment figures show that 3.9 percent... 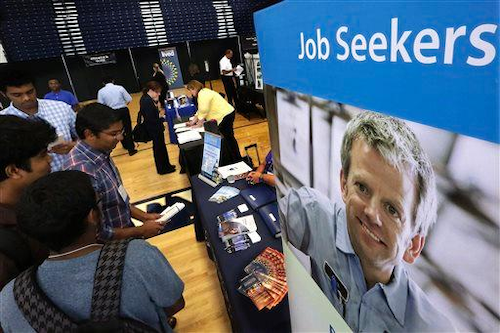 Minnesota's unemployment fell to an eight-year low in October, dropping to less than 4 percent, and the state has added nearly 50,000 jobs so far this year, according to state employment data released Thursday.

Marking a steady trend in the state, seasonally adjusted employment figures show that 3.9 percent of Minnesota residents were unemployed in October, down from 4.6 at the start of 2014 and the lowest rate since 2006. Nationwide, 5.8 percent of Americans are unemployed.

"We're just on a hot streak here with positive developments in our labor market," said Steve Hine, research director at the Minnesota Department of Employment and Economic Development.

Though past decreases have been driven largely by residents leaving the workforce, the number of people working has grown over the past few months, Hine said. The state's labor participation rate remained unchanged from last month, at 69.9 percent.

Minnesota employers added 9,500 jobs in October, bringing this year's total to nearly 50,000 new jobs — more than half of which were added in the last three months.

In the last year, professional and business services employers have added nearly 12,000 jobs, and manufacturing posted the second-biggest gains with about 10,500. The only sector to lose jobs was financial activities, which lost about 3,100 jobs in the last year.

The retail and fast-food industries — two sectors affected by the state's minimum wage hike in the summer — appear to be doing just fine, Hine said. Retail employment gains were among the brightest, adding 5,300 jobs last month, and fast food employers posted "the strongest growth ... that we have seen in quite some time," he said.