Japan has slipped back into a recession for the second time in two years. That could mean more trouble for a range of U.S companies and industries that count on the country for sales. Best known as an exporter of cars, gadgets and comic books, Japan is also a key consumer of U.S. goods... 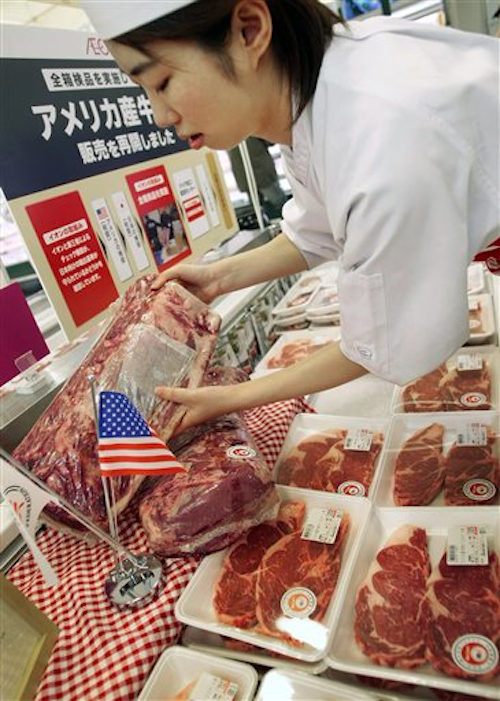 Japan has slipped back into a recession for the second time in two years. That could mean more trouble for a range of U.S companies and industries that count on the country for sales.

Best known as an exporter of cars, gadgets and comic books, Japan is also a key consumer of U.S. goods and services from name-brand companies. Japanese customers take a shine to diamonds from Tiffany, strap on handbags from Coach, and ride choppers from Harley-Davidson.

"If the Japanese economy continues to shrink, it has a big impact on other countries," says Sheila Smith, senior fellow for Japan studies at the Council on Foreign Relations. "It's not like some isolated economy. Having a strong and vibrant Japan is important for everybody."

On Tuesday, Prime Minister Shinzo Abe announced steps aimed at keeping the downturn from getting worse. Abe postponed another hike in the national sales tax and called for national elections next month. An increase in that sales tax earlier this year has been widely blamed for the most recent slump.

Here's a brief look at the economic ties between the U.S. and Japan, the world's third-largest economy, as well as the American businesses that could be hardest hit by the recession.

SIZE: Japan ranked as the fourth-largest trading partner for the U.S. last year, with $204 billion in goods passing between the two countries, according to the U.S. Trade Representative's office. Even though Japan sells more to the rest of the world than it buys, it's still a top destination for U.S. exports, after Canada, Mexico and China.

FROM JET PARTS TO PORK: What does Japan buy from the U.S.? A wide variety of things, starting with chemicals and transportation equipment. Last year, sales of medical instruments to Japan totaled $8 billion and aircraft totaled $7 billion, according to the USTR. Japan spent $3.3 billion on American pork and beef.

EXPOSED: The companies with the most to lose from an ailing Japan include insurers and luxury retailers. Coach and Tiffany & Co. rely on Japanese customers for more than 10 percent of their sales. Adobe Systems, the software company, generates a similar share of its sales from Japan.

THAT DUCK: At the extreme end sits Aflac. It's essentially a Japanese company based in Columbus, Georgia. In its most recent quarter, 74 percent of its revenue came from selling insurance and generating investment income in Japan.

DRAG ON BAGS: Coach, the maker of luxury handbags, reported that its Japanese sales sank 7 percent in its latest quarter. Victor Luis, the company's CEO, told investors on a conference call that the decline reflected the "continuing impact" of the country's higher consumption tax. Factor in the weaker yen, and Coach's overall sales in Japan as measured in U.S. dollars fell 12 percent.

HOGS: Harley Davidson, which gets a tenth of its revenue from Japan, said Japanese sales of its rumbling motorcycles slumped 7 percent in the three months ending in September.

UNPLEASANT SURPRISE: Japan's government said Monday that the country's economy shrank 1.6 percent between July and September, the second straight quarterly decline — a common definition of a recession. The slowdown surprised most economists, who had expected Japan to expand at a 2 percent rate after shrinking 7 percent in the previous quarter.