Stunned workers at a shuttering paper mill in Bucksport said Thursday they're going to be scrambling for work and residents said they fear a huge tax increase when the long-standing Verso mill closes.The announcement that the mill will... 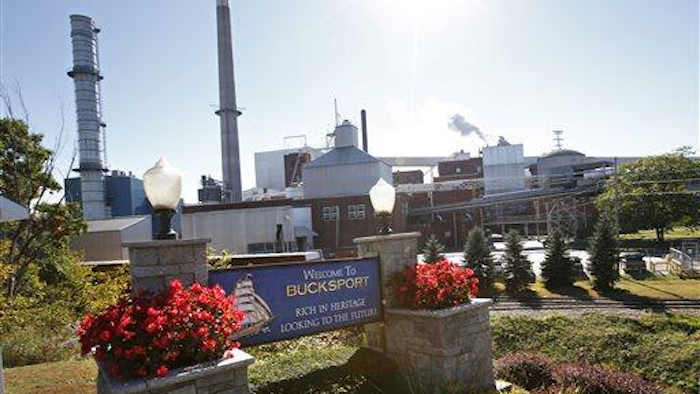 Stunned workers at a shuttering paper mill in Bucksport said Thursday they're going to be scrambling for work and residents said they fear a huge tax increase when the long-standing Verso mill closes.

The announcement that the mill will close Dec. 1 came as surprise to workers, who said they had no idea such a move was being considered. Danny Carter, a 27-year employee, said workers and residents are shocked — both about hundreds of layoffs and the prospect of life in Bucksport without the mill, which has towered above the head of Penobscot Bay for more than 80 years.

"People are in awe, trying to digest it," said Carter, who works at the mill sifting through ground-up logs for dirt and debris. "It happened so fast."

The mill employs 570 people and its taxes accounts for more than 40 percent of Bucksport's budget. Town manager Derik Goodine said the mill's closure presents a challenge to reinvent Bucksport.

The town will work with the state, and perhaps tap its reserve fund, to try to stem a hefty tax increase, he said. Meanwhile, it will put a greater emphasis on drawing tourists, he said.

"When you look at Bucksport from the Penobscot Narrows Bridge, with the steeples and trees, it's almost like a postcard New England town," Goodine said. "It was always more than a mill town."

In the shadow of the mill, longtime resident Charlie Sheehan was skeptical.

Sheehan, who worked at the mill for 25 years until the 1970s, said he feared a property tax spike for seniors on fixed incomes like himself.

"It's not just hurting the guys that work there, it's going to hurt everybody," Sheehan said.

The announcement came a week after Great Northern Paper filed for bankruptcy. The closure reflects a trend of contraction in Maine's paper industry, which employed more than 12,000 people in 2000 and is down to about 7,000 today, state labor and trade organization statistics say.

John Williams, president of the Maine Pulp and Paper Association, said the Bucksport mill closure is a "big hit" for the statewide industry, and it was unexpected in light of the company's planned merger with NewPage, which operates a mill in Rumford. Verso also operates a mill in Jay.

He said Maine's paper mills also indirectly support thousands of other jobs around the state in the form of truckers, suppliers, harvesters and others.

"I thought the Bucksport mill was a good mill and they would likely survive once the merger happened," Williams said. "Yes, it's a surprise."

Maine Gov. Paul LePage says he's going to do what he can to keep the Bucksport mill open or find a new buyer. He also said the state will try to work with displaced workers to help them find new employment or job training. He added that when he learned of the mill's closure he "thought they were calling us about the merger."

Company representatives did not return calls seeking comment on Thursday, but President David Paterson said Wednesday that it is "impossible" for the facility to make money in the current economic climate. Company officials have also said the company will provide assistance to affected employees.

For more information on the closing of the Verso Paper Mill, read "Verso Announces Closure Of Bucksport Paper Mill"