Atlanta Federal Reserve President Dennis Lockhart said Thursday that he has increasing confidence in the economy but still wants to see more data to prove that growth is on a sustainable path before raising interest rates, saying he doesn't expect rates to ... 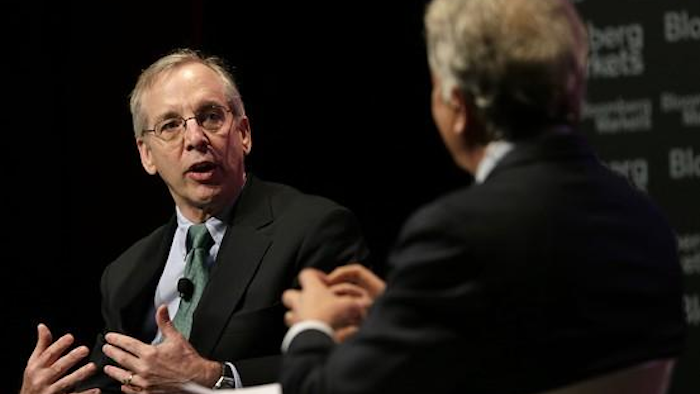 Atlanta Federal Reserve President Dennis Lockhart said Thursday that he has increasing confidence in the economy but still wants to see more data to prove that growth is on a sustainable path before raising interest rates, saying he doesn't expect rates to rise until mid-2015 or later.

Speaking to the Mississippi Council on Economic Education, Lockhart said he sees little danger of inflation. He said the current unemployment rate is "still some distance" from full employment, which he defined as a jobless rate in the 5.2 percent to 5.6 percent range.

"No one has a perfect crystal ball, but I am rather confident that we'll get to economic conditions between mid- and late next year that would justify initiating a period of normalization of the interest rate environment," he said.

Lockhart's occasional public speeches are sifted carefully by bankers and traders for hints on future Fed actions. He participates in the Federal Reserve's discussions on monetary policy such as setting interest rates or buying bonds, although he's not currently a voting member of the interest-rate setting Federal Open Market Committee.

The speech follows last week's meeting of the committee, where members said they would keep interest rates low for a "considerable period."

Lockhart said significant slack remains in the labor market. If anything, he said, there's a greater risk today that inflation will "undershoot" the Federal Reserve's 2 percent target, although he expects price increase will "firm up" as the economy improves.

"Inflation is reflecting what are still, in my view, lukewarm demand conditions," he said.

Lockhart said he expects the U.S. will approach full employment by late 2016 or early 2017. He emphasized that timing of higher interest rates is not "foreordained" and could change depending on economic performance. He told reporters after the speech that it would better to run the risk of being a little late to raise rates than risk making a "premature decision" that could derail unsteady growth.

"When we begin to change policy, we want to have confidence in the outlook," he said.

Lockhart said he's increasingly confident that growth for the rest of 2014 will continue at 3 percent, and that data "has been encouraging in many respects," although consumer spending remains weak. He also said he's worried about a strengthening dollar driving down exports, especially of expensive items such as airplanes. Overall, he said he thinks the labor market is making "steady progress" but said "there is more work to do before we should be satisfied with employment conditions in the country."

He said high stock and bond prices do not pose a systemic risk of a crisis in the financial system such as the one that accompanied the beginning of the recession in 2007 and 2008.

"I take comfort in the much-strengthened defenses of the banking system, financial institutions in general and financial regulators," Lockhart said

Lockhart has been president of the Atlanta bank since 2007. It covers all of Alabama, Florida and Georgia and parts of Louisiana, Mississippi and Tennessee.

Employment in Mississippi has lagged behind the national recovery. Lockhart said he expects the state to grow moderately in the medium term, but said Mississippi faces challenges over the long-term and needs to focus on building a better workforce, attracting manufacturing jobs that will be strong in the future and replacing defense and casino jobs that may be at risk.