Senators Closing In On Deal To Reopen Government

Senate leaders are closing in on an agreement to reopen the government and forestall an economy-rattling default on U.S. obligations. Majority Leader Harry Reid, D-Nev., and GOP leader Mitch McConnell of Kentucky could seal an agreement on Tuesday, just two days before the Treasury Department says it will run out of borrowing capacity. 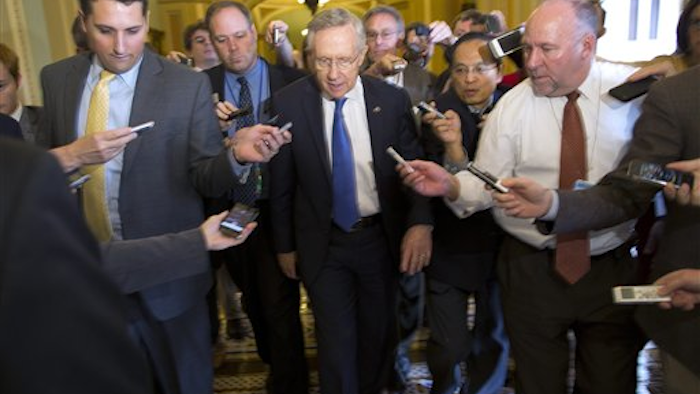 WASHINGTON (AP) -- Senate leaders are closing in on an agreement to reopen the government and forestall an economy-rattling default on U.S. obligations.

Majority Leader Harry Reid, D-Nev., and GOP leader Mitch McConnell of Kentucky could seal an agreement on Tuesday, just two days before the Treasury Department says it will run out of borrowing capacity.

The emerging pact would reopen the government through Jan. 15 and permit the Treasury to borrow normally until early to mid-February, easing dual crises that have sapped confidence in the economy and taken a sledgehammer to the GOP's poll numbers.

"The general framework is there" between Reid and McConnell, said Sen. Bob Corker, R-Tenn. He said conversations with the House were continuing and he thought it would be midday Tuesday at the earliest before a plan was finalized.

President Barack Obama telephoned McConnell on Monday to talk about the emerging deal, a McConnell aide said. Congressional leaders had been scheduled to meet with Obama at the White House on Monday, but the meeting was postponed to allow more time for negotiations.

Sen. Mark Pryor, an Arkansas Democrat who was part of the bipartisan group known as the Gang of 12 which labored over the weekend to end the stalemate, said Tuesday he was "pretty confident" the Senate leadership and the White House would announce an agreement some time later in the day.

Sen. Amy Klobuchar, D-Minn., also a part of the Gang of 12, told "CBS This Morning" she believes an agreement is near that "doesn't contain a lot of the partisan pills" that sank earlier proposals. She said it's urgent that national leaders find solutions to vexing issues so that the country doesn't "lurch from one financial crisis to another."

Many House conservatives were unhappy about the emerging framework, though it remained to be seen whether they would seek to change it.

The developing plan is a far cry from the assault on "Obamacare" that tea party Republicans originally demanded as a condition for a short-term funding bill to keep the government fully operational. It lacks the budget cuts demanded by Republicans in exchange for increasing the government's $16.7 trillion borrowing cap.

Nor does the framework contain any of a secondary set of House GOP demands, like a one-year delay in the health law's mandate that individuals buy insurance. Instead, it appeared likely to tighten income verification requirements for individuals who qualify for Obamacare subsidies and may repeal a $63 fee that companies must pay for each person they cover under the big health care overhaul beginning in 2014.

Democratic and Republican aides described the outlines of the potential agreement on condition of anonymity because the discussions were ongoing.

But with GOP poll numbers plummeting and the country growing weary of a shutdown entering its third week, Senate Republicans in particular were eager to end the shutdown — and avoid an even greater crisis if the government were to default later this month.

Any legislation backed by both Reid and McConnell can be expected to sail through the Senate, though any individual senators could delay it.

But it's another story in the House, where it wasn't winning a lot of fans among conservatives.

Rep. Joe Barton, R-Texas, signaled that conservative members of the House were deeply skeptical. He said any bill had to have serious spending cuts for him to vote to raise the debt ceiling and said he thought Obama and Treasury Secretary Jack Lew had more flexibility than they had said publicly.

"No deal is better than a bad deal," Barton said.

Asked whether the emerging package contained any victories for Republicans, Rep. James Lankford, R-Okla., a member of the House GOP leadership, said, "Not that I've seen so far, no."

McConnell briefed House Speaker John Boehner, R-Ohio, on Monday on the status of the Senate talks. Both House and Senate GOP leaders scheduled closed-door meetings of their respective memberships for Tuesday.

The stock market turned positive on bullish predictions from Reid and McConnell. The Dow Jones industrial average, which had risen strongly late last week on hopes of an agreement, rose another 64 points Monday.

In addition to approving legislation to fund the government until late this year and avert a possible debt crisis later this week or month, the potential pact would set up broader budget negotiations between the GOP-controlled House and Democratic-led Senate. One goal of those talks would be to ease automatic spending cuts that began in March and could deepen in January, when about $20 billion in further cuts are set to slam the Pentagon.

Democrats were standing against a GOP-backed proposal to suspend a medical device tax that was enacted as part of the health care law.

Democrats also were seeking to preserve the Treasury Department's ability to use extraordinary accounting measures to buy additional time after the government reaches any extended debt ceiling. Such measures have permitted Treasury to avert a default for almost five months since the government officially hit the debt limit in mid-May, but wouldn't buy anywhere near that kind of time next year, experts said.

Some lawmakers are frustrated that defusing the immediate standoff simply sets up another fight next year.

"It's punting because no one, Democrats, Republicans wants to face up — and the American people — to the tough reality that we're in," said Sen. Richard Shelby, R-Ala. "It's all a temporary fix."