The mere announcement of a bipartisan accord on the legislation reignited a longtime feud among liberal and pro-business Democrats over the deal's potential to create or subtract American jobs. 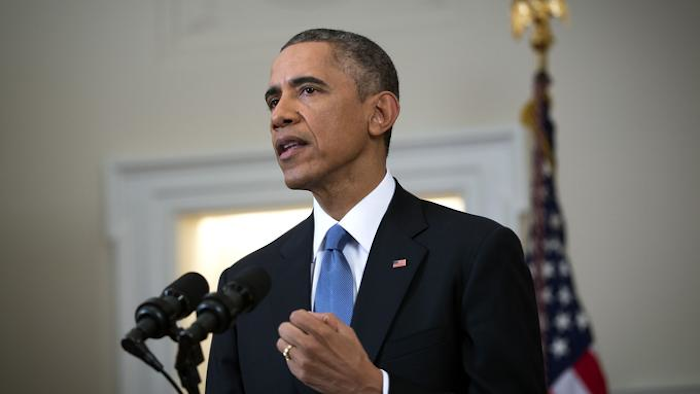 President Barack Obama pushed back Friday against Democrats who oppose a bipartisan accord on trade, dismissing their stand as a "ratification of the status quo" that would give countries like China a leg up on global commerce.

"We've got to make sure we're writing the rules so that we have a level playing field," Obama said during a news conference alongside Italian Prime Minister Matteo Renzi.

His comments came as many Democrats rose up against the deal announced Thursday on the broadest bipartisan trade bill in years.

Earlier Friday, Michigan Rep. Sander Levin, the top Democrat on the House Ways and Means Committee, told reporters that the trade bill — and Obama's effort to sell it to congressional allies — is in trouble unless it is rewritten to accommodate concerns about American jobs and the environment.

"I'm out to defeat" it, Levin, senior Democrat on the House Ways and Means Committee, told reporters. "That's the overwhelming view of Democrats in the House."

Big political stakes loom for Obama, both at home and overseas. He's trying to advance talks on a sweeping partnership with 11 Pacific nations, and Japanese Prime Minister Shinzo Abe is set to address a joint session of Congress April 29.

House and Senate committees are set to consider the legislation in the days before the address. Obama has said he would sign the bill if Congress passes it.

"What is exceptional is that in this framework, for the first time, there are requirements for enforceable labor, environmental provisions, there is clear attention to issues like human rights, and in many ways, this is the most far-reaching and progressive trade promotion authority that we've seen going through Congress," Obama told reporters.

The issue shadows the 2016 presidential campaign, too, as Hillary Rodham Clinton launches her bid to unite the Democrats. Levin refused to say whether he's spoken with her or her aides on the subject.

Anyone hoping to unite the Democratic Party on the issue faces steep odds. The mere announcement of a bipartisan accord on the legislation reignited a longtime feud among liberal and pro-business Democrats over the deal's potential to create or subtract American jobs.

"Over and over again, we've been told that trade deals will create jobs and better protect workers and the environment," said Sen. Bob Casey, D-Pa. "Those promises have never come to fruition."

House Speaker John Boehner, R-Ohio, applauded the deal but said much of the burden of its success rests with Obama.

"He must secure the support from his own party that's needed to ensure strong, bipartisan passage," Boehner said in a statement that was echoed by the U.S. Chamber of Commerce.

It was the second time this week that Obama looked into the maw of opposition from his own party over a rare bipartisan accord. On Tuesday, the Senate Foreign Relations Committee unanimously approved a bill that would give Congress the right to review and possibly reject any deal he strikes over Iran's nuclear capability. Recognizing the futility of fighting, the administration abruptly announced the president would sign the legislation.

But some Democrats and labor unions say such measures facilitate agreements that wind up destroying jobs in the U.S. and creating jobs in nations that lack the environmental and worker safety protections that exist in the United States.

Teamsters General President Jim Hoffa said the bill "would allow secret trade pacts to sail through Congress with no chance to alter them. That's bad for American workers as well as their families."

The Obama administration rejects those claims and says U.S. goods and services must have greater access to foreign buyers.

Sen. Sherrod Brown, D-Ohio, said the agreement marked only a start and could be derailed by amendments that might be added when lawmakers consider the bill in committees or on the floor.

Traditionally, trade legislation has also been accompanied by a parallel bill that provides funding under the Trade Adjustment Assistance program for American workers who are adversely affected by international accords. Wyden and Sen. Susan Collins, R-Maine, unveiled the parallel bill shortly after the trade agreement was announced.

Wyden also introduced separate legislation to renew an expired health care tax break for workers eligible for trade adjustment assistance. The bill would provide a tax credit equal to 72.5 percent of the cost of health insurance.