Orders to U.S. factories dropped for a fifth consecutive month in December, while a key category that signals business investment plans fell for a fourth straight month. Factory orders declined 3.4 percent in December after a 1.7 percent drop in November, the Commerce Department reported Tuesday. It was the biggest drop since... 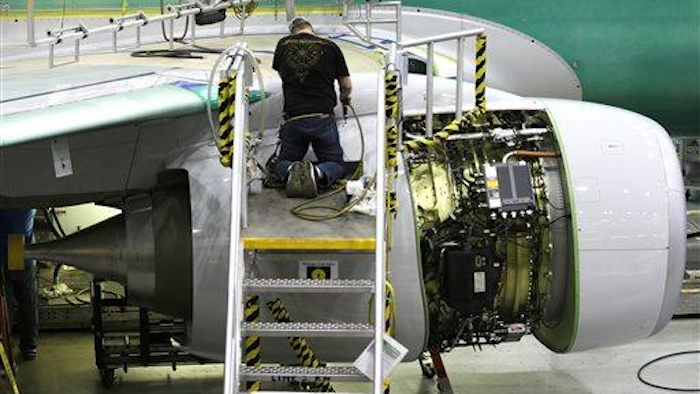 Orders to U.S. factories dropped for a fifth consecutive month in December, while a key category that signals business investment plans fell for a fourth straight month.

Factory orders declined 3.4 percent in December after a 1.7 percent drop in November, the Commerce Department reported Tuesday. It was the biggest drop since a 10 percent plunge in August and marked the fifth straight month that orders have fallen.

Demand in a key category that serves as a proxy for business investment plans edged down 0.1 percent after bigger declines in the previous three months.

The stronger U.S. dollar and global weakness have hurt American exports, but economists are still optimistic that surging domestic demand will result in a rebound in factory orders this year.

The weakness in December was led by a 55.5 percent plunge in demand in the volatile category of commercial aircraft. Demand for autos was up 1.1 percent, and the overall transportation category fell 9.1 percent.

Orders for all durable goods fell 3.3 percent, a slight revision from a preliminary report last week which had durable goods falling 3.4 percent in December.

Demand for nondurable goods such as paper, chemicals and food fell 3.4 percent in December after a 1.2 percent decline in November.

Many categories showed weakness in December with demand for primary metals such as steel down 1.9 percent, while orders for machinery dropped 3.2 percent. In the machinery category, orders for oil drilling equipment were down 7.9 percent, a decline that may reflect the big plunge in recent months in oil prices. Various oil companies have reported plans to cut back on exploration.

The government reported that the overall economy, as measured by the gross domestic product, grew by at a moderate 2.6 percent annual rate in the October-December quarter, a sharp slowdown from 5 percent growth in the third quarter.

Economists believe that the slowdown will be temporary, and growth will accelerate this year as consumer spending remains strong, reflecting solid hiring and a big drop in gas prices which is giving households more money to spend on other items.

The hope is that the gain in consumer spending will be enough to offset a drag from the global economy, reflecting spreading weakness in many key export markets and a rising value of the dollar, which makes U.S. goods less competitive overseas.

The expectation now is that the overall U.S. economy will grow at a rate above 3 percent for all of 2015, given the country the best annual growth in a decade.

Factory production in November surpassed its pre-recession peak, according to data from the Federal Reserve, helped by healthy gains at auto plants.