The 129-year-old manufacturer hopes the harder bat, which is less likely to splinter, and more modern logo will help the family-owned company stay relevant in the sporting good supply market and ahead of competitors in luring younger ballplayers to its products. 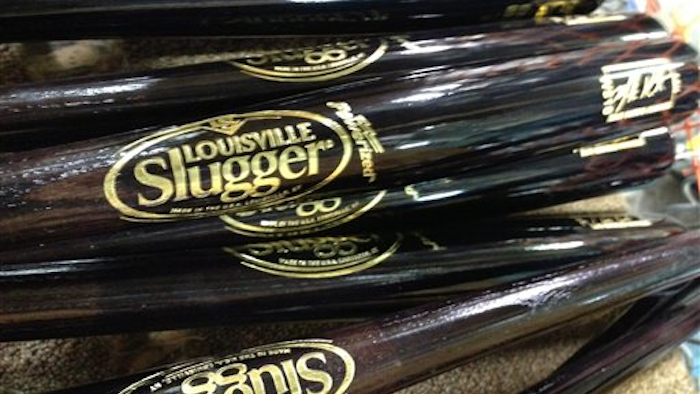 LOUISVILLE, Ky. (AP) — The familiar smell of hot dogs and freshly cut grass on Major League Baseball's Opening Day will be complemented by changes to the iconic Louisville Slugger bat, which is now made with firmer wood and stamped with a new logo.

The 129-year-old manufacturer hopes the harder bat, which is less likely to splinter, and more modern logo will help the family-owned company stay relevant in the sporting good supply market and ahead of competitors in luring younger ballplayers to its products.

The new logo is the first such change since the company dropped the "Hillerich & Bradsby" name from the center of its oval design and replaced it with "Louisville Slugger" in 1980. And the new bats, which are made from a high-grade wood and processed to enhance the surface's hardness, are the biggest change in the hardware since the introduction of cup-ended bats in 1972.

"You have to ask yourself, Do you really need to change it?" Louisville Slugger CEO John Hillerich said of the logos and bats. "Our greatest asset is our brand."

The changes were the result of a multi-year process that involved talking with everyone from corporate partners to players about what they wanted in a bat to how the new logo looked on the equipment.

The new bats — made of ash or maple — are designed to be harder than previous models. Bobby Hillerich, director of Wood Bat Manufacturing for Louisville Slugger, said new selection processes for the wood, as well as drying and processing methods, have created a bat hard enough to reach a grade of 9h — the highest rating possible by the American Society for Testing and Materials.

Buyers search for the hardest wood available — known as veneer wood — which is vacuum dried to pull moisture out of the wood and push the material closer together, Bobby Hillerich said. Once that is done, the wood is cut into billets used to create the bats. The billets are shaped and compressed before being finished with a water-based coating, logo, and any coloring and player signature.

Part of the aim of the new bat is to keep it from splintering on the field. In recent years, baseball officials have been concerned about maple bats breaking or shattering, creating potential hazards for infielders. Bobby Hillerich said the new bats have held up well in tests.

"The crack of the bat is just so much different because of the drying process," Hillerich said.

Howard Smith, Vice President of Licensing for Major League Baseball, said players tested the new bats toward the end of the 2012 season and gave it "rave reviews." Louisville Slugger has refined bat-making to a science, Smith said.

"In terms of the slope of the grain, which determines how hard the wood will be, Louisville has been able to harvest the best wood with the most perfect as you can get slope of grain," Smith said. "It has absolutely contributed to less bats breaking on the field."

Older bats featured the model number and the Louisville Slugger name in parallel lines around a player's signature.

"We saw the brand in need of a small bit of an infusion of modernity," said Kyle Schlegel, vice president of Global Marketing for Hillerich & Bradsby.

"Changing such an iconic logo can come with risks, particularly if the alterations are dramatic enough to cause customers to not recognize the brand identity," said Michael Barone, a professor of marketing at the University of Louisville. Other long-standing brands, such as Ivory, Betty Crocker and Harley-Davidson, have successfully made small logo changes over the years, Barone said.

"When you've been in the market that long, consumers may start to think you are not as contemporary or relevant as you really are," Barone said. "A logo could signal something new. It helps get attention back to a mature brand."

To John Hillerich, the logo change and launch on Opening Day fits well with the future he sees for the company, a path that takes it into deeper ties with baseball. Along with bats, the new logo will appear on equipment bags, catcher equipment and gloves.

Eventually, the logo could appear on apparel and other items, possibly even pop-up stores or restaurants, Hillerich said.

"Could you take that on the road?" he asked. "Those decisions are five to 10 years out, depending on how you grow the company."