Despite big deals such as Rosneft's takeover of fellow Russian oil company TNK-BP for a projected $54.5 billion, and Glencore International PLC's $45.8 billion acquisition of miner Xstrata PLC, Ernst & Young is forecasting that the value of global M&A was 47 percent lower in 2012 at $2.25 trillion. 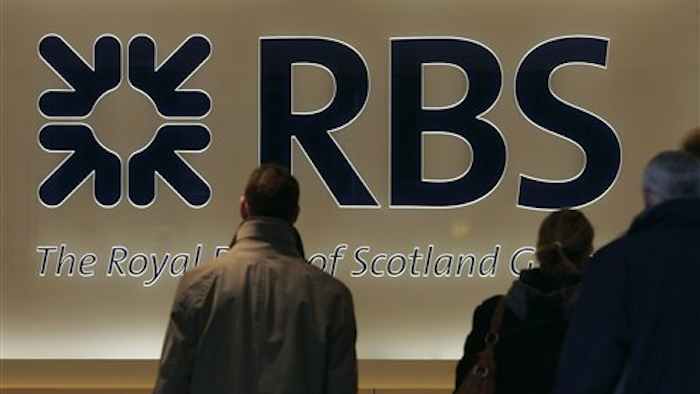 LONDON (AP) -- The value of mergers and acquisitions deals around the world in 2012 was nearly half the amount made five years ago, when the financial crisis first bared its teeth, a leading accounting and consulting firm said Wednesday.

Despite big deals such as Rosneft's takeover of fellow Russian oil company TNK-BP for a projected $54.5 billion, and Glencore International PLC's $45.8 billion acquisition of miner Xstrata PLC, Ernst & Young is forecasting that the value of global M&A was 47 percent lower in 2012 at $2.25 trillion, against 2007's $4.3 trillion. The company noted a shift in activity from developed economies to high-growth ones in Asia and Latin America — the value of deals in the U.S. halved while those in China doubled.

There were a little under 37,000 deals worldwide, around 9,000 less than in 2007, when many companies took part in a feverish bout of deal-making, many of which proved to be too costly for the companies to bear. Much of the blame for Royal Bank of Scotland PLC's near-collapse in 2008, which eventually required a government bailout, was due to its over-priced purchase of a large chunk of Dutch bank ABN Amro the year before.

The excess of corporate deals in 2007 contributed to the near freezing of credit markets that year and paved the way for the global banking crisis in 2008 and the subsequent global recession.

However, Ernst & Young said this year's slump in corporate activity was mainly due to the uncertainty created by the debt crisis afflicting the 17 European Union countries that use the euro as well as fears over the impending "fiscal cliff" of automatic spending cuts and tax increases in the U.S.

"Acute caution was the prevailing M&A sentiment in 2012," said Pip McCrostie, global head of Ernst & Young's M&A division. "The eurozone crisis continues to impact 9 global companies in every 10 and in 2012 we saw its impact reduce the appetite for M&A, even in many formerly deal-hungry emerging markets. Limited deal activity will likely continue through 2013, especially if we don't see a clear, long term resolution to the fiscal cliff."

One clear consequence of the eurozone debt crisis in Europe has been to lower the currency bloc's share of the deals that do take place. In 2007, the eurozone accounted for around 21 percent of the global value of M&A. That's now down at 11 percent.

While the eurozone has suffered, the so-called BRIC countries— the fast-growing economies of Brazil, Russia, India and China — are filling the gap. They accounted for 15 percent of the global M&A market in 2012, more than double 2007's rate of just 7 percent.

Even if the rapid growth of the BRIC countries over the previous few years wasn't fully sustained in 2012, the global M&A landscape has transformed over the past five years. Since 2007, the value of China's M&A market has doubled, while that of the U.S. has halved, Ernst & Young found.

"China's growing global economic influence, along with the other emerging economies, has been a re-occurring narrative over the past decade," said McCrostie. "Now the numbers tell their own story — the shift in the balance of M&A power has accelerated since the financial crisis and it will likely become even more pronounced in 2013."

Ernst & Young found that China will be the preferred investment destination in 2013. The U.S., India, Brazil, and Germany completed the top five.

The survey, conducted in October, compiles the views of 1,500 senior executives from large companies around the world and across industry sectors.