The head of American Crystal Sugar Co. said Thursday that the company is still willing to negotiate with locked-out factory workers, but he didn't think it was a good idea to let them parade around at the company's annual shareholders meeting. 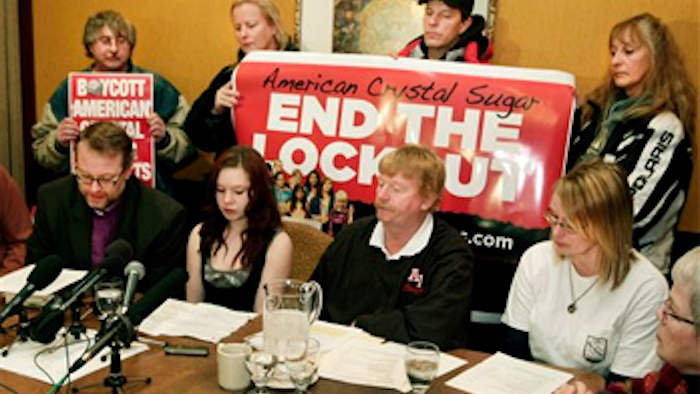 FARGO, N.D. (AP) — The head of American Crystal Sugar Co. said Thursday that the company is still willing to negotiate with locked-out factory workers, but he didn't think it was a good idea to let them parade around at the company's annual shareholders meeting.

David Berg, the company's CEO, told reporters after his annual address to growers that the company will "talk earnestly" if a federal mediator calls for another negotiating session in a contract dispute that has stretched into its 17th month. In the meantime, he said, there's sugar to be made.

"Picket signs and protests, you know, if that's important to you, I wish you the best in that activity," Berg said, referring to the union workers. "But frankly we have a sugar company to run and that's we're doing."

As hundreds of shareholders gathered in the ballroom of the Fargo Holiday Inn, a delegation of union workers, family members and community representatives huddled in the back of the hotel restaurant and pleaded with the company to end the lockout. Sandra Fish, a daughter of a locked-out worker, read from a letter she said she wrote to Berg.

"No workers or their families should be going through this," she said. "I ask you please to give their jobs back."

After the news conference, union representatives tried to enter the hallway near the ballroom to present attendees of the annual meeting with what they said were tens of thousands of petitions from people who want an end to the lockout. They were turned away by hotel officials and their request to have a company official accept the petitions was denied.

"I did not know they tried to get into the meeting room," Berg said later. "I have 2,800 shareholders and lots of other people who are there and I'm frankly focused on what's going on there."

Berg added that "it would not have been good" to interrupt the session.

The lockout began on Aug. 1, 2011, and affected about 1,300 workers at plants in North Dakota, Minnesota and Iowa. Members of the Bakery, Confectionery, Tobacco Workers and Grain Millers AFL-CIO have rejected the contract proposal four times. Fifty-five percent of voters turned down the proposal in the most recent polling last weekend.

The company has continued to operate the plants with replacement workers, some of whom were honored Thursday with so-called "president's awards" for their efforts on the factory floors.

Berg said the company has received more than 11,000 job applications since November 2011. About 1,000 of those people are currently on the payroll, which includes about 100 former union workers. About 500 union employees have either resigned or retired and there may be others who have not given formal notice, Berg said.

Replacements workers have received accelerated training and labor costs are going down, the Crystal CEO said.

"I would be misleading to say that it's no longer impacting American Crystal," Berg said. "The impact is diminishing rapidly."