The report says investment in solar energy surged to $147 billion, and that the demise of companies such as Solyndra was a sign that the industry is maturing. 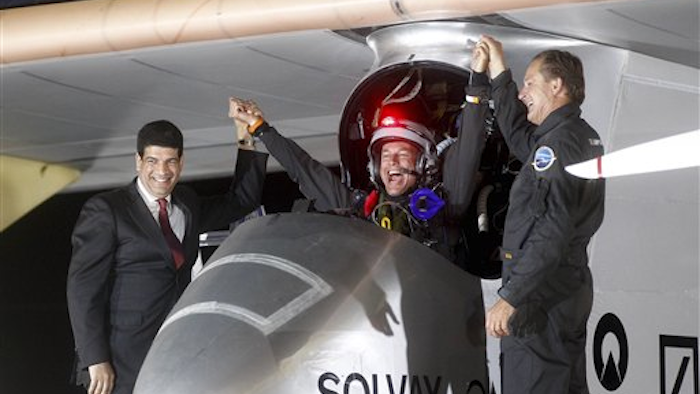 In this June 5, 2012 photo, construction continues on the Sustainable Energy Research Facility (SERF), a completely off-grid green building, at Frostburg State University in Frostburg, Md. The building will generate its own electricity from solar and wind power. SERF construction will be completed this summer and equipment for the structure will be installed in the fall, at which point the building will be functional. (AP Photo/Cumberland Times-News/Steven Bittner)

GENEVA (AP) — Global investment in renewable energy reached a record of $257 billion last year, with solar attracting more than half the total spending, according to a U.N. report released Monday.

Investment in solar energy surged to $147 billion in 2011, a year-on-year increase of 52 percent thanks to strong demand for rooftop photovoltaic installations in Germany, Italy, China and Britain.

Large-scale solar thermal installations in Spain and the United States also contributed to growth during a fiercely competitive year for the solar industry. Several large American and German manufacturers fell victim to price pressure from Chinese rivals that helped to halve the cost of photovoltaic modules in 2011.

The report's authors said the demise of companies such as Solyndra, Evergreen Solar, SpectraWatt, Solar Millenium and Solon was a sign that the solar industry is maturing.

"In 1903, the United States had over 500 car companies, most of which quickly fell by the wayside even as the automobile sector grew into an industrial juggernaut," the report said. "Today, the renewable energy sector is experiencing similar growing pains as the sector consolidates."

China was responsible for almost a fifth of the total investment volume, spending $52 billion on renewable energy last year. The United States was close behind with investments of $51 billion, as developers sought to benefit from government incentive programs before they expired. Germany, Italy and India rounded out the top five.

Solar Impulse pilots Bertrand Piccard, center, celebrates with Andre Borschberg, right, and Mustapha Bakkoury, president of the Moroccan Agency for Solar Energy upon arrival at Rabat airport, Morocco, Tuesday, June 5, 2012. The experimental solar-powered airplane landed in Morocco's capital late Tuesday after a 20-hour trip from Madrid in the first transcontinental flight by a craft of its type. The mission is being described as a final dress rehearsal for a round-the-world flight with a new and improved plane in 2014. (AP Photo/Abdeljalil Bounhar)

Wind power investment slipped 12 percent to $84 billion due to uncertainty about energy policy in Europe and fewer new installations in China, according to the report.

Overall investment in renewable energy grew 17 percent, a slowdown from the 37 percent increase seen in 2010. Still, the head of the U.N. Environment Program claimed the latest figures were an indication that renewable energy is drawing level with fossil fuels in some markets.

"These trends are real, they are substantive and they are transformative," Achim Steiner told reporters in a conference call.

The U.N. is hoping that countries will use an environmental summit in Rio de Janeiro, Brazil, next week to commit to further investments in renewable energy, which covered just 16.7 percent of global energy consumption in 2010. Of this share, modern technologies such as solar and wind accounted for just 8.2 percent, less than the 8.5 percent contributed by biomass.

By comparison, more than 80 percent of electricity consumed worldwide still comes from fossil fuels that are blamed for a rise in carbon in the atmosphere.

The U.N. report claims that solar panels installed in Germany, Italy, Spain, Denmark and Australia can now compete with the retail cost of electricity in those countries, even as government feed-in subsidies are lowered.

It noted that developing countries were also exploring the use of renewable energy other than hydropower, which has long been a popular source in poor countries.

Nations in East Africa are seeking to take advantage of the abundant geothermal capacity in the Rift Valley region. Kenya aims to meet half of its electricity needs with geothermal power by 2018. Djibouti, Eritrea, Rwanda, Tanzania and Uganda are also exploring geothermal use.