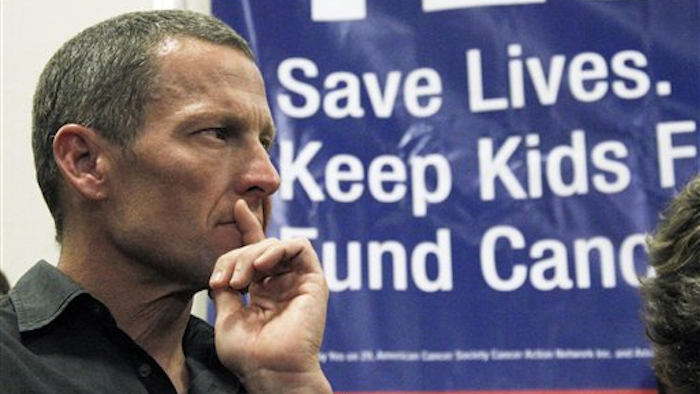 In this Friday, May 11, 2012 file photo, Cycling legend and cancer survivor Lance Armstrong attends a rally at a news conference at Children's Hospital in Los Angeles in favor of Proposition 29, a measure on the June 2012 California primary election ballot that would add a $1-per-pack tax on cigarettes. (AP Photo/Reed Saxon)

LOS ANGELES, Calif. (AP) — A high-profile California cigarette tax initiative backed by cycling legend Lance Armstrong that once seemed like a sure thing teetered on the brink of defeat Wednesday, a testament to the efficacy of a $50 million campaign backed by Big Tobacco.

A blizzard of industry-financed radio and television advertisements over the last two months closed the gap on an effort to impose an additional $1-per-pack tax on cigarettes to fund cancer research.

In March, a statewide poll suggested the Proposition 29 would pass with two-thirds approval.

But the race was too close to call the morning after Election Day. With millions of votes still to be counted, it could be days or longer before a winner is declared.

The situation reminded some of a 2006 California cigarette tax measure that was leading by wide margins untiltobacco companies spent $66 million to defeat it.

The attempt to hike taxes on cigarettes and other tobacco products grew into a national fight last month with tobacco companies pouring in millions to quash the effort and celebrities including the New York City Mayor urging voters to support it.

As returns came in, both camps said they expected a close race but remained confident they would emerge the winner.

"We expected that as voters took a look at the measure, they would recognize the serious flaws, and as well intentioned as the measure is, they would realize it's not right for California," Beth Miller, spokeswoman for the No on 29 campaign said Wednesday.

Tobacco taxes have been proven to reduce smoking. But opponents said the initiative would create an unaccountable bureaucracy in charge of doling out the tax revenue, which is expected to start at $735 million a year.

An extra tax in the nation's most populous state also could mean major losses for tobacco companies, and Proposition 29 supporters said industry heavyweights were inventing arguments to obscure their true motive — safeguarding profits.

"I think the public health message has gotten through the smoke screen of the tobacco companies' nearly $50 million misinformation campaign," Jim Knox of the American Cancer Society said Tuesday.

Armstrong and a coalition of anti-smoking groups raised about $18 million to bolster the measure. New York City Mayor Michael Bloomberg gave $500,000 to the campaign to help offset the industry donations.

Majorities in the Democratic-leaning counties along the Northern California coast favored the tax, while majorities in most other regions others opposed it. Voters on both sides expressed strong convictions as they cast their ballots.

"I think that we should aggressively discourage smoking — make it less convenient, make it more expensive," said Susan Hyman of Long Beach.

In nearby Glendale, Craig Jerpseth, a 43 year-old nurse, was equally certain about voting the measure down.

"I hope we don't get any more taxes. That's pretty much it," he said.

A slew of newspapers, including the Los Angeles Times, opposed the measure while proclaiming their reluctance to side with tobacco companies. They argued that the revenue should go to the state, which Gov. Jerry Brown announced last month now faces a deficit of $16 billion.

With a smoking rate of 12.1 percent, California has not raised these taxes since 2000. If the measure passes, California would still have only the 16th highest tax rate in the nation.

Associated Press writers Raquel Maria Dillon in Los Angeles and Amy Taxin in Long Beach and contributed to this report.