Karl Rove, an advisor to former president George W. Bush, said the Production Tax Credit is not about "picking winners and losers" in the energy market. 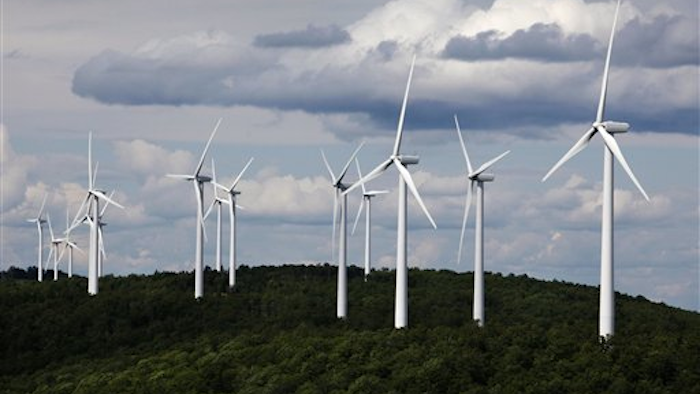 In this July 14, 2009 file photo, a cluster of windmills catch the wind blowing on Stetson Mountain, in Range 8, Township 3, Maine. A group of wind power executives, meeting in Atlanta, says a stalled effort to renew federal tax credits for the industry is creating instability and financial concerns. Meanwhile, presidential aides Karl Rove and Robert Gibbs spoke with executives at their annual conference about bipartisan support for the tax credits but a tough political climate between now and the November presidential election. (AP Photo/Robert F. Bukaty, files)

ATLANTA (AP) — A stalled effort to renew federal tax credits for the wind power industry is making it hard tokeep employees on the payroll and plan for expansion, a group of executives said Tuesday, but two high-profile Washington figures advised them not to expect help until after the November election.

The Production Tax Credit, the primary cost-saving policy for the industry, expires at the end of the year and the executives said their companies are already feeling the effects.

"The issue is, the longer you wait, the more critical (the tax credit) becomes," said Jan Blittersdorf president of Vermont-based NRG Systems, a 25-year-old company that manufactures goods for the industry. "This is really serious. This is the first time in 30 years we've had to do layoffs and once you start to dismantle this system it's hard to put it back together."

Blittersdorf echoed the fears of several panelists at the WINDPOWER 2012 Conference & Exhibition about jobloss, not just within their own companies, but in the entire sector. They said suppliers would also be strapped for cash when the demand suddenly drops.

Tom Carnahan of Wind Rose Partners said the industry has experienced fluctuations before, but this is different.

"There is more at stake this time; every month matters, is critical," Carnahan said. "Developers have already started layoffs and every quarter of this year we are going to lose jobs. It will be a tragedy not to find a way to get this tax (credit) extended..."

Executives say extending the tax credit would not only benefit suppliers and manufacturers, but also the estimated 75,000 people employed by the industry.

The problem does not appear to be a lack of political support, former presidential aides Karl Rove and Robert Gibbs told several thousand people gathered in Atlanta for the annual conference.

"The policy is airtight," Gibbs said. "We understand the jobs it produces, we understand the impact it has on our energy portfolio, and quite frankly there's no reason we shouldn't do it."

Gibbs, who served as press secretary for President Barack Obama, said Washington power players recognize the economic impact of the industry on the country. However, a tough political climate between now and the November presidential election will make a quick resolution unlikely, he said.

"This election is about jobs and your industry is about jobs," Gibbs said. "There has never been a better match."

And though the tax credit is widely supported, that's not going to be enough to speed Congress up, said Rove, who was an advisor to former president George W. Bush.

"My hope is that after the election people say, 'Look, let's start making some priorities and find some things that we can agree on, and maybe one of them is the Production Tax Credit,'" said Rove. "It is a market mechanism, you don't get paid unless you produce the power, and we're not picking winners and losers, we're simply saying for some period of time we will provide this incentive."