Japan PM: Two Reactors Must Be Restarted To 'Survive'

Prime Minister Yoshihiko Noda suggested if the country doesn't return to nuclear power, the Japanese livelihood and economic stability would be threatened. 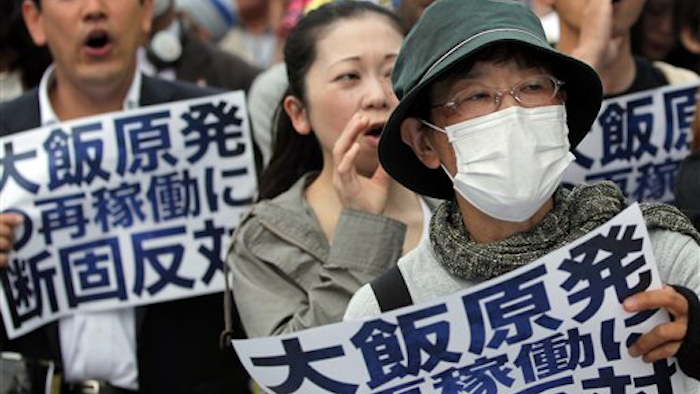 TOKYO (AP) — Japan's leader appealed to the nation Friday to accept that two nuclear reactors that remained shuttered after the Fukushima disaster must be restarted to protect the economy and people's livelihoods.

Prime Minister Yoshihiko Noda said the government has taken ample safety measures to ensure the tworeactors in western Japan would not leak radiation if an earthquake or tsunami as severe as last year's should strike them.

All 50 of Japan's workable reactors are offline for maintenance and safety concerns since the magnitude 9.0 earthquake and tsunami on March 11, 2011, swept into a coastal plant in Fukushima and sparked the world's second-worst nuclear disaster.

The two reactors at the Ohi nuclear plant are the first two ready to resume generating power, but the public has shown great concern that government failures worsened last year's crisis and may recur.

Nuclear energy is crucial for Japanese society, Noda said in a news conference broadcast live. The government wants the reactors to be operational to avoid a summertime energy crunch.

"We should restart the Ohi No. 3 and No. 4 reactors in order to protect the people's livelihoods," Noda said. "The Japanese society cannot survive if we stop all nuclear reactors or keep them halted."

Noda said a 15 percent power deficit is expected in the western region, a level he called "severe." Without nuclear energy, utilities would have to rely more heavily on expensive fossil fuel, which would increase electricity bills and financial strain on small businesses.

Local consent is not legally required for restarting the reactors, though government ministers have promised to gain understanding from the prefecture.

Noda's speech Friday possibly removes the last obstacle before a resumption of the Ohi reactors. The Fukui governor made Noda's public appeal conditional to his consent for the startup. With the governor's consent, Noda is expected to make a final go ahead as early as next week, so the restart could take place within days.

Noda said the peak of energy demand for the summer is approaching, requiring "a quick decision."

He said major cities around the Ohi plant should thank local residents for their burden of supplying electricity to towns around the west, despite the safety concerns, apparently seeking to gain their understanding for the resumption.

Fukui, where 13 reactors are clustered in four complexes along the coast, is often called Japan's "Nuclear Alley," making the region Japan's most nuclear-dependent area.

The government issued new safety guidelines in April to address residents' worries. In response, Kansai Electric Power Co. submitted its safety plans for two reactors at the plant, saying the full upgrades will take up to three years.

Some of the most crucial measures to secure cooling functions and prevent meltdowns as in Fukushima were installed, but more than one-third of the necessary upgrades on the list are still incomplete.

"It's horrifying just to imagine if it hadn't been there yet," Shimizu told a parliamentary accident inquiry Friday.

Noda, however, said that the safety measures are provisional and that they would have to be more closely examined when a new regulatory agency is installed. The step has been delayed due to demands by opposition parties to make it more independent than the government proposal.