The government confirmed that the highly virulent H5 strain was detected in birds at a chicken farm in Niigata, where about 40 of them were found dead Monday. Dead ducks at a farm in another prefecture of Aomori also tested H5 positive. 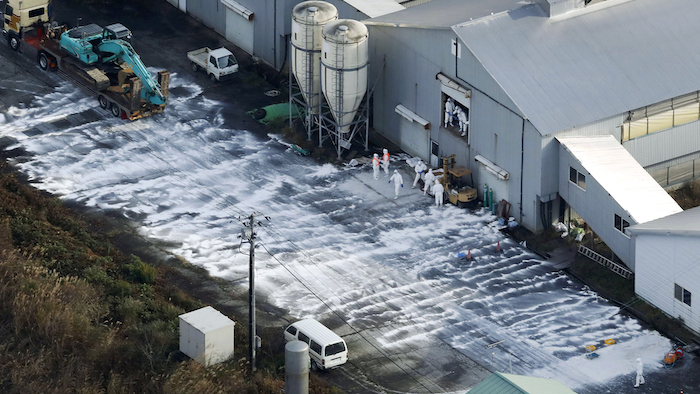 TOKYO (AP) — Japanese health authorities have confirmed a highly contagious avian flu strain in poultry in two prefectures in northern Japan, with culling of hundreds of thousands of birds starting Tuesday at the affected farms.

The government confirmed that the highly virulent H5 strain was detected in birds at a chicken farm in Niigata, where about 40 of them were found dead Monday. Dead ducks at a farm in another prefecture of Aomori also tested H5 positive.

Culling of about 310,000 birds began Tuesday at the Niigata farm and will continue through Friday. Workers in hazmat suits dug holes and dumped dead birds in them to contain the spread of virus. About 165,000 ducks in Aomori were also being culled.

Officials restricted the movements of poultry and eggs within 3 kilometers (5 miles) of the infected farms. About 60 chicken farms operate in the neighborhood of the affected farm in Niigata, where about half a million chickens are raised. The farm in Aomori and two other neighborhood operators are specializing in French duck known as "Barbarie."

Suspected bird flu cases have been found in wild birds in those areas since early November.

Environment Minister Koichi Yamamoto told reporters that his ministry is sending experts to the areas for investigation, while raising the caution level to the highest level. The Agricultural Ministry has also dispatched an investigative team to both prefectures.