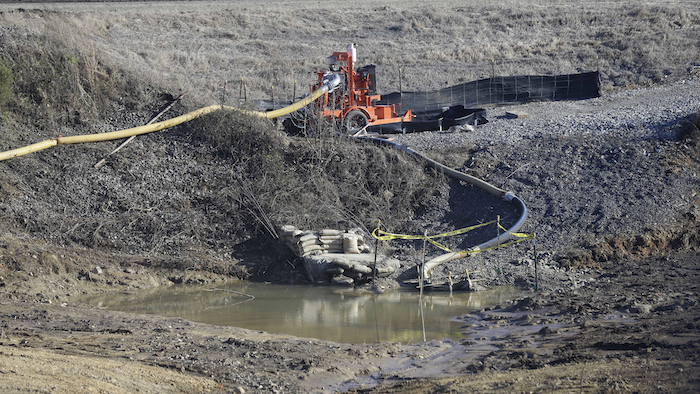 RALEIGH, N.C. (AP) — Officials in North Carolina Gov. Pat McCrory's administration are telling a string of misleading half-truths about the safety of well water containing a cancer-causing chemical near Duke Energy coal ash pits, a veteran state toxicologist said Wednesday, and he charged that they are the ones responsible for any resulting fear and confusion.

Toxicologist Ken Rudo's comments in a statement issued through his attorney came a day after high-ranking state environmental and health officials blamed Rudo for sowing fear about dangerous chemicals near Duke Energy sites with "questionable and inconsistent scientific conclusions."

In a deposition last month, Rudo said the state's top public health official acted unethically and possibly illegally by telling residents living near Duke Energy's coal ash pits that their well water is safe to drink when it's contaminated with hexavalent chromium, a chemical known to cause cancer.

North Carolina's state public health director Dr. Randall Williams and Department of Environmental Quality Assistant Secretary Tom Reeder said Tuesday that Rudo had established a too-cautious health standard for hexavalent chromium in groundwater. The standard — one chance in a million that people drinking contaminated water could develop cancer over a lifetime — was set by the state agencies before warning letters were issued last year to about 330 neighbors of Duke Energy coal sites. Officials this year decided that standard was too high. Williams and Reeder reversed course and declared the water safe to drink in a March letter to well owners.

The revised guideline is in line with federal standards for municipal water supplies that most Americans drink daily, Reeder said Wednesday. He's so sure about that decision he said he'd tell a neighbor, "I would gladly drink her water any day, for the rest of my life ... I know there is absolutely no risk from drinking that water."

McCrory worked for Duke Energy for nearly three decades before his election in 2012. Environmentalists complain that under his leadership state environmental officials have shown deference to the governor's former employer. McCrory denies showing any favoritism.

Rudo said in a statement first provided to The Associated Press that he was simply following procedures required by state law when calculating the cancer-risk standard for hexavalent chromium. State legislators passed a new state law requiring residential wells near Duke's coal ash pits to be tested for contamination after a massive 2014spill at one of the company's dumps coated 70 miles of the Dan River in gray sludge laced with harmful heavy metals.

The state Department of Health and Human Services, where Rudo has worked for nearly 30 years, initially applied a far looser standard — a level for public water supplies set by the U.S. Environmental Protection Agency in the 1990s before the cancer risk posed by hexavalent chromium was known. State law requires a "do not drink" recommendation if there's a stricter one-in-a-million cancer risk, so that's what health and environmental agencies calculated and eventually agreed upon, Rudo said.

"This consensus, regarding what health protective values to use to protect the well water of the NC residents adjacent to the coal ash ponds, and how to communicate these to folks, was what Dr. Rudo followed, based on specific instructions from his superiors at DHHS," the statement issued by Rudo's attorney said.

Rudo said he thought the new cancer-risk threshold should be extended to all water wells, not just those near the coal-ash pits that had been tested. "Dr. Rudo's request to extend this protection to all well water was denied, and is still denied," the statement said.

But if that hexavalent chromium standard were applied evenly, it would apply to about 900,000 wells in the state, and millions of people would be urged against using their water, Williams and Reeder said Tuesday. Williams did not respond Wednesday to an interview request.

Meanwhile, one of Rudo's colleagues, state epidemiologist Dr. Megan Davies, resigned Wednesday, saying McCrory administration officials were trying to mislead the public about how the well water warnings were developed.

"I cannot work for a Department and an Administration that deliberately misleads the public," Davies wrote in her resignation letter.

Hexavalent chromium can cause lung cancer when inhaled, and the Environmental Protection Agency says it's likely carcinogenic when ingested. Based on the most-recent scientific studies, Rudo concluded the chemicalwould cause an increased lifetime risk of causing tumors in those who drink it, especially pregnant women and children.

A byproduct created when coal is burned to generate electricity, coal ash also contains other toxic heavy metals, such as lead and arsenic. Duke denies its massive coal ash dumps are the source of the harmful chemicalsshowing up in residential wells, though it agreed to voluntarily provide bottled water to the affected households ringing its power plants. The company has suggested the contamination occurs naturally.