"I smelled a strong odor and started feeling bad," worker Maria Garcia later told a state investigator. "I had a headache, itchy eyes and threw up." 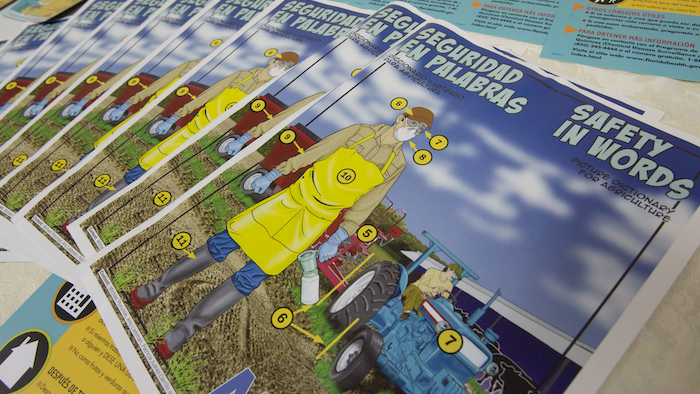 In this Thursday, Nov. 12, 2015 photo, safety pamphlets written in both English and Spanish are displayed during a pesticide safety training class for farm supervisors in Sebring, Fla. Millions of farm workers do jobs with a high risk of exposure to toxic chemicals every day, yet a federal system of protections meant to improve safety and provide an avenue for reporting exposure is ineffective and riddled with problems, according to an Associated Press review of federal and state enforcement data and case records. (AP Photo/Wilfredo Lee) 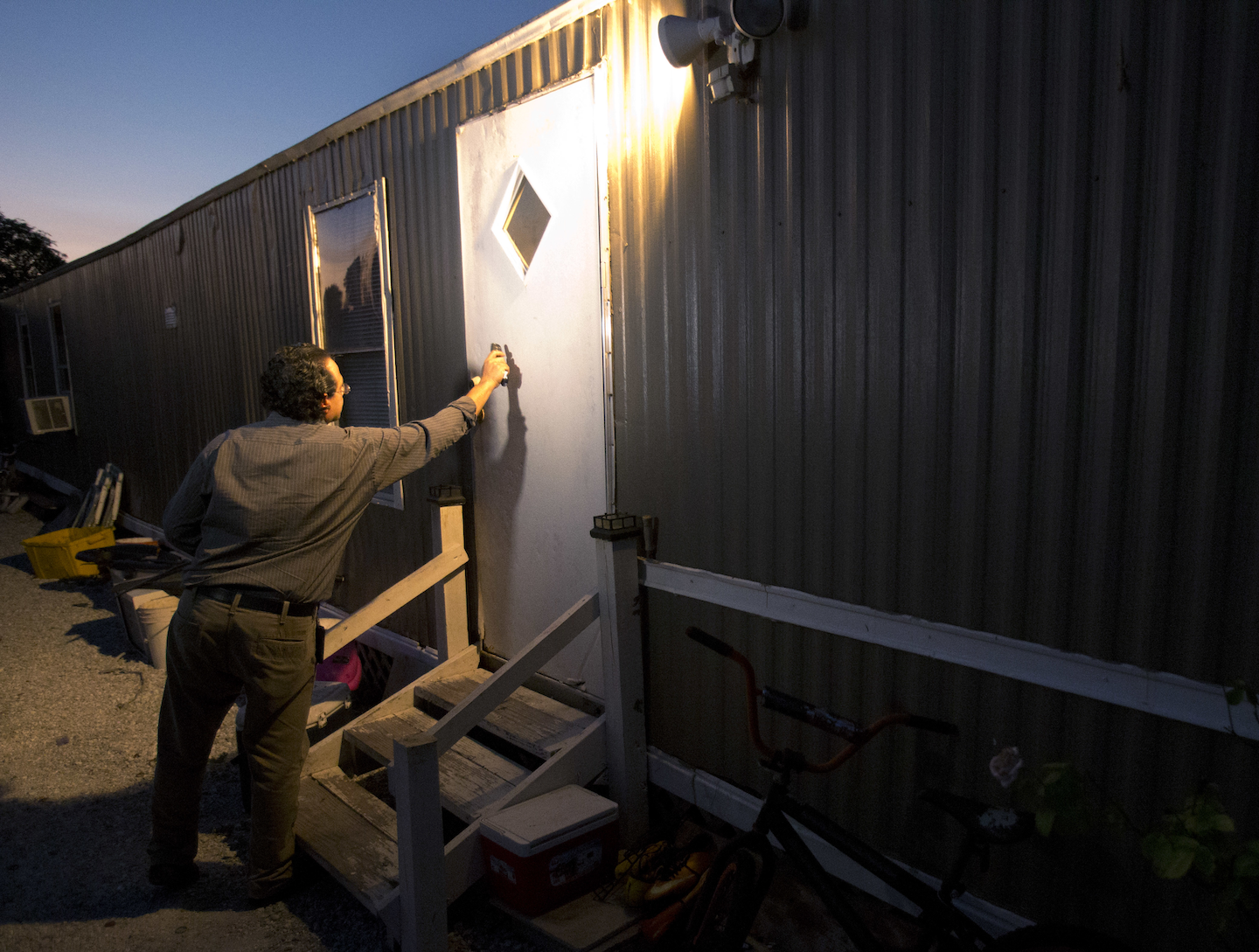 Antonio Tovar-Aguilar, an investigator with the Florida Department of Health, knocks on a farm worker's door during a follow-up visit in Belle Glade, Fla. Farm workers are supposed to be protected by government rules regulating exposure to toxic pesticides and herbicides. But an Associated Press review of federal and state enforcement data and other records showed that the system is riddled with problems. (AP Photo/Wilfredo Lee)

BELLE GLADE, Fla. (AP) — Dozens of farmworkers looked up at the little yellow plane buzzing over the Florida radish field, a mist of pesticide falling from its wings.

Farmworkers are supposed to be protected by government rules regulating exposure to toxic farm chemicals. But in this case, the breeze pushed the pesticide over the crew in a neighboring field, where it fell mostly on women, including at least one who was pregnant.

"I smelled a strong odor and started feeling bad," worker Maria Garcia later told a state investigator. "I had a headache, itchy eyes and threw up."

The health investigator assigned to the case said more than a dozen workers showed symptoms of pesticide poisoning, and also found evidence that the farm and crop-dusting contractor may have violated federal farmworker safety laws.

An Associated Press review of federal and state enforcement data and other records revealed that the pesticide-safety system is riddled with problems: Investigations often take years to complete and result in few penalties. Written warnings are common, fines rare. Compliance is sometimes voluntary, not required. And worker anonymity can be compromised, making employees reluctant to report violations.

The agriculture industry defends the system, saying the low numbers are a sign that farms are doing a good job of protecting workers.

President Barack Obama's administration recently adopted tougher farmworker protections after 20 years of debate and fierce resistance from the chemical and agricultural lobbies. The more stringent regulations adopt annual training requirements, safeguards to keep children workers out of the fields and stronger penalties for companies that retaliate against workers who report violations. However, when they take effect in 2017, all of the new rules will still rely on the existing enforcement system. 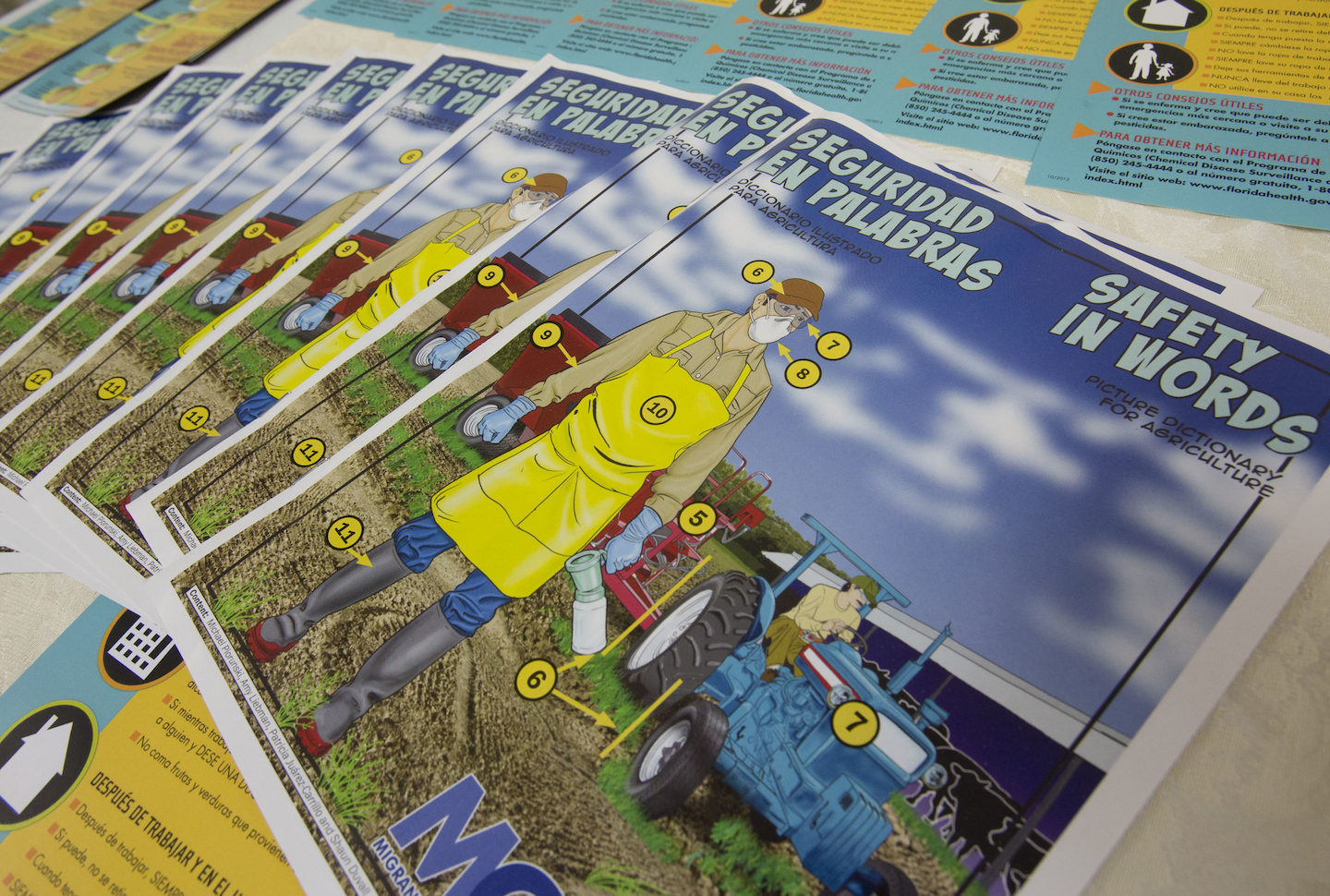 In this Thursday, Nov. 12, 2015 photo, safety pamphlets written in both English and Spanish are displayed during a pesticide safety training class for farm supervisors in Sebring, Fla. Millions of farm workers do jobs with a high risk of exposure to toxic chemicals every day, yet a federal system of protections meant to improve safety and provide an avenue for reporting exposure is ineffective and riddled with problems, according to an Associated Press review of federal and state enforcement data and case records. (AP Photo/Wilfredo Lee)

Adding to the troubles are the regulators themselves. In all states except California, enforcement of federal pesticide-safety laws is managed by the same agencies that promote agricultural industries.

The Florida workers fell ill on Oct. 14, 2014, in Belle Glade, a farm town near Lake Okeechobee where the motto is "Her soil is her fortune." They had been moved at the last minute to a celery field owned by Duda Farms. Rains the previous night had made the fields they were supposed to plant too soggy.

That was not communicated to the crop-duster pilot, who should have waited to spray a "restricted-use" pesticide called Bathyroid XL, records show.

Twelve women including Garcia and one man were hospitalized. Many were released and cleared to go back to work after a few hours. But some, including the pregnant worker, required follow-up medical screening for lingering symptoms, according to state health records about the incident.

Despite the findings about pesticide poisoning and evidence of violations, a state investigation resulted in no punishment for the farm and, after more than a year, only the small fine for the crop duster, according to the case file obtained by the AP through a public-records request. Workers contacted by the AP said they were never interviewed.

"The Florida system is terribly broken," said Greg Schell of Florida Legal Services, a national expert who has been litigating farmworker cases for decades. "Unless you see somebody being sprayed, it's your word against the employer."

It's not clear how many workers get sick from pesticides each year. No one gathers comprehensive data.

A program run by the National Institute of Occupational Safety and Health identified 5,200 workers with acute pesticide-related illness, and eight deaths, in 11 states between 1998 and 2006. Those cases included only poisonings confirmed by doctors.

Using that data and other sources, the EPA estimates that the nation's 2 million farmworkers suffer 10,000 to 20,000 cases of doctor-diagnosed pesticide poisoning in the U.S. every year.

Many workers are afraid to report problems, especially those who have come to the U.S. illegally or are here on worker visas, and their immigration status is controlled by their employers.

After the incident in Belle Glade, some of the Florida workers sprayed by the crop duster were advised by supervisors against taking legal action, according to state documents obtained by AP.

"They were told 'You would never find a job in agriculture again. Their husbands may also be fired, and it would take years to get a settlement,'" said Antonio Tovar, the Florida health department investigator on the case.

Luis Martinez, one of the workers in the field that day, confirmed that he was discouraged from filing a formal complaint with the state.

Defenders of the agriculture industry say the lack of fines and violations in Florida and other places shows a high level of compliance, not lax enforcement.

"The culture has changed. There may be a few bad apples, but they are few and far between," said Gene McAvoy, who runs state pesticide safety trainings for farm supervisors in Florida.

Farm spokeswoman Donna Duda denied that anyone from the company had spoken to the workers. Jose Ojeda of Martinez & Sons Trucking, the contractor in charge of the workers that day, denied his staff discouraged workers from filing a complaint.

The Florida Department of Agriculture and Consumer Services never interviewed any workers about the retaliation or intimidation claims, despite a tip from the health inspector that some workers were talking about it.

In a statement, the agency denied being told about the intimidation allegations and said it would have investigated if it had known.

When workers do come forward, they face a yearslong process that often ends with nothing but a warning for the farm. In other cases, people who complain are sometimes put in professional exile.

North Carolina tobacco worker Cayetano Dominguez-Rosales complained to state investigators when 12 workers on his crew got sick in 2010 after witnessing pesticides being sprayed in a field that was no more than 40 paces away. Records show they all sat down and felt dizzy and nauseas.

After going to the hospital, he returned to work and was told to sign a "voluntary quit" paper giving up his job. He had worked for 15 years on North Carolina tobacco farms and never fallen ill, he said, but the incident left him without work. He returned to Mexico.

Nearly a year after he left, a state investigation issued a warning to the farm.

Pesticide investigations in North Carolina can take up to two years, and the vast majority nationwide end in warnings.

"A warning just says 'We're not going to hold you responsible for these actions,'" said Caitlin Ryland, an attorney at Legal Aid of North Carolina. "Really, there's no teeth at all in that law."