Rescuers on Friday pulled out four miners who had spent 36 days trapped underground in a collapsed mine in eastern China. 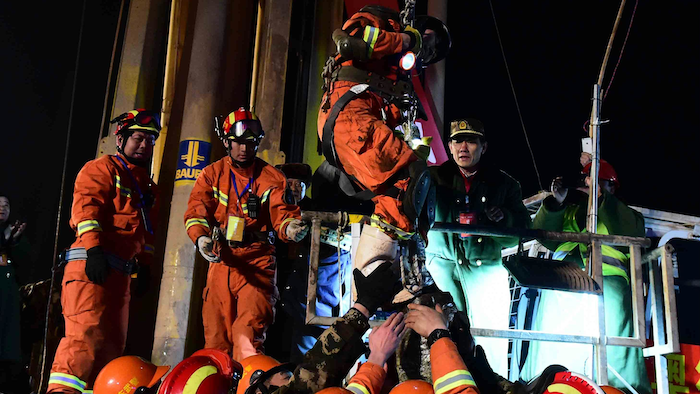 The first miner, is lifted from a collapsed mine in Pingyi, east China's Shandong Province, Friday evening Jan. 29, 2016. Chinese state media say two miners have been rescued from a collapsed mine after spending 36 days trapped underground. Efforts continued Friday to reach the remaining two people in the mine in east China's Shandong province. The gypsum mine collapsed on Christmas Day, killing one and leaving 13 others missing. In the days that followed, rescuers detected four survivors 200 meters (660 feet) below the surface. (Guo Xulei/Xinhua via AP)

BEIJING (AP) — Rescuers on Friday pulled out four miners who had spent 36 days trapped underground in a collapsed mine in eastern China.

The gypsum mine in Shandong province collapsed on Christmas Day, killing one and leaving 17 missing, including the four survivors. In the days that followed, rescuers detected the four more than 200 meters (660 feet) below the surface.

State broadcaster CCTV showed a miner being pulled out, surrounded by cheering rescuers in helmets and news crews. Medical staff rushed another miner along hospital corridors on a stretcher with his eyes covered.

Rescuers brought out the workers through two access tunnels they had drilled, and the first miner was pulled out in a capsule, the official Xinhua News Agency reported.

The collapse on Dec. 25 was so violent it registered as a seismic event registering magnitude 4. Five days later, infrared cameras detected the four miners weak with hunger waving their hands. The miners told rescuers they were in underground passages that were intact, and rescuers began slowly drilling a route to save them. They sent food and clothes to the men through four small tunnels they drilled.

Eleven other people in the mine at the time of the collapse made it to safety or were rescued earlier.

Two days after the collapse, the owner of the mine, Ma Congbo, jumped into a well and drowned in an apparent suicide. Four top officials in Pingyi county, where the mine is located, have been fired.

In 2010, 33 miners in Chile were rescued after being trapped for 69 days underground, including more than two weeks when no one knew whether they were alive.

China's mines have long been the world's deadliest, but safety improvements have reduced deaths in recent years.