The federal investigators also said many communities in the state still face the threat of another deadly explosion. 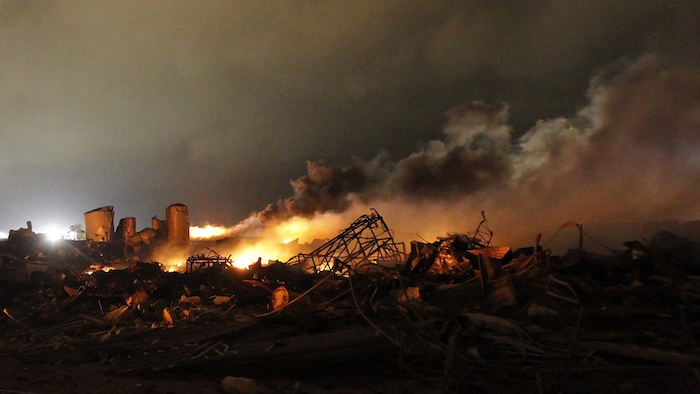 Volunteer firefighters were fighting a blaze at a West Fertilizer Co. storage and distribution facility in 2013 when an estimated 30 tons of ammonium nitrate exploded, damaging more than 150 buildings and creating a crater 10 feet deep. Twelve of the 15 people who died from the blast were first responders. More than 250 people were injured.

What was behind one of Texas’ worst industrial accidents?

According to a final report from the U.S. Chemical Safety Board, the agency charged with investigating chemical accidents, the fire and poor storage of ammonium nitrate were technically the culprits. But a shoddy regulatory system laid the groundwork for creating the dangerous situation.

Battling The Fire
The report outlined three ways the fire and explosion could have happened, but what seems most likely is that heat, pressure and debris caused by the fire set off the explosion of ammonium nitrate being stored at the facility.

According to the CSB: “The molten FGAN [fertilizer-grade ammonium nitrate] likely came in contact with contaminants that were stored in the fertilizer warehouse or were produced during the fire that preceded the explosion. Seed materials, zinc, and other organic products, including the wood-constructed bins, were present near the FGAN storage area or could have come in contact with molten FGAN. During the fire, soot from the smoke and also collapsing wood and roofing material might have mixed with the FGAN pile.”

The report also noted that there was no sprinkler system and that Texas is one of the only states without a fire code.

Making matters worse was that firefighters were not properly trained to handle the situation. As preliminary reports on the disaster from the CSB have noted, there was no clear chain of command among the volunteer firefighters, no effort to evacuate nearby residents, and no adequate training for dealing with hazardous materials — all factors that could have contributed to the loss of life.

Regulations
The CSB blamed every level of government for not properly regulating the storage of ammonium nitrate.

According to the report: “The CSB determined that FGAN storage falls under a patchwork of U.S. safety standards and guidance — a patchwork that has many large gaps. These gaps include a lack of adequate federal, state or local oversight on FGAN storage and handling and the permitted use of combustible wooden buildings and wooden storage bins.”

In its recommendations, the CSB called on OSHA and the EPA to strengthen their regulations of ammonium nitrate storage to protect the public from further hazards.

The board also noted that insurance companies could play a role in improving standards if they inspected for safety while underwriting policies. Notably, West Fertilizer had been dropped by its insurance in 2009 for not having a positive safety culture and faulty electric wiring.

Still at Risk
Have regulations improved since the disaster? Not enough, according to the CSB.

Despite an executive order by President Obama in 2013 to improve chemical safety, the CSB said that state regulations still don’t prevent the storage of ammonium nitrate in wooden bins, and do not prohibit storing the chemical in any particular place.

As a result, the board says many communities around Texas are still at risk.

According to AP: “Nineteen plants storing fertilizer-grade ammonium nitrate operate within a half-mile of a school, hospital or nursing home, according to the report. More than 30 of them are within a quarter-mile of a home or apartment building.”