As Deaths Rise, So Do Chances Of Total Takata Airbag Recall

Experts say there could be as many as 50 million Takata airbag inflators in cars that have yet to be called back for repairs. 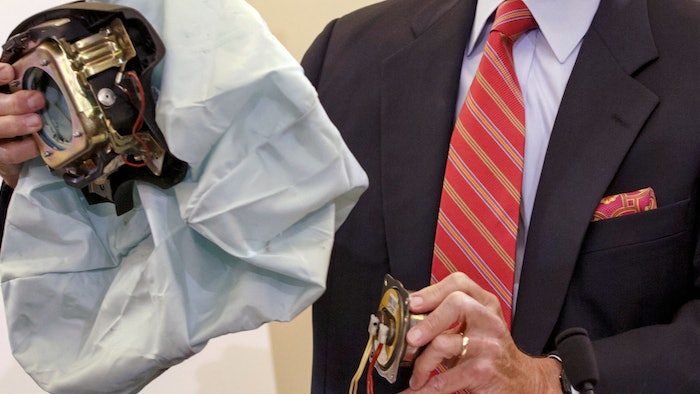 As the Takata airbag saga drags on, concerns are growing that tens of millions of U.S. drivers with cars that haven't been recalled could be at risk of death or injury from the potentially defective devices.

Federal safety regulators last month confirmed that a South Carolina man's death in December was caused by a driver's airbag inflator that wasn't under recall. It was the ninth Takata-related fatality in the U.S.

In a Feb. 10 letter to Mark Rosekind, head of the National Highway Traffic Safety Administration, Sen. Bill Nelson, D-Fla., urged the agency to recall all Takata inflators in U.S. cars. He said the agency's current approach of issuing recalls piecemeal, "appears to be confusing many consumers" who wonder if their cars have an unsafe airbag that hasn't been recalled.

Since 2008, 14 automakers have recalled 24 million vehicles to replace the inflators, which can rupture in a crash, shooting metal shards at the driver and passengers.

Experts say there could be as many as 50 million Takata air bag inflators in cars that have yet to be called back for repairs. For drivers of those vehicles, finding out if their car has a Takata inflator can be tricky. They either have to convince a dealer to take apart the car to look, or get the automaker to tell them. Some, like General Motors and Ford, won't tell. Nissan and Toyota won't say if they will disclose a Takata inflator. Fiat Chrysler, Mazda, Mercedes and BMW say they'll tell if asked.

NHTSA spokesman Gordon Trowbridge says the agency doesn't have the data yet to justify a recall of every Takata inflator. The agency has given Takata until the end of 2018 to solve the problem or issue a blanket recall. Takata says it continues to investigate the cause; NHTSA and the auto industry also have investigations under way.

The death of Joel Knight, 52, underscores how perplexing the search for a solution is. On Dec. 22, Knight's 2006 Ford Ranger struck a cow on a rural road near his home in Kershaw, South Carolina. He died after metal fragments from the driver's inflator impaled his neck. According to a law firm representing Knight's family, the crash was moderate and otherwise survivable.

NHTSA says Knight's driver airbag hadn't been recalled because tests on hundreds of inflators like the one used in his Ranger did not show any failures. The passenger airbag had been recalled.

Knight's death fits into one prevailing theory about the cause of the ruptures: his truck was an older model, and spent a long period of time in a region with high humidity.

Takata is nearly alone among inflator makers in using the chemical ammonium nitrate to create a small explosion that inflates the bags in a crash. Tests show that over time, high temperatures and humidity can degrade the chemical, causing it to explode with too much force, rupturing a metal canister that's supposed to contain the explosion. The pieces can hit a car's occupants.

Initially, the recalls targeted older vehicles along the Gulf Coast, and NHTSA has ordered that dealers in those areas receive the bulk of replacement inflators as they're made. But the latest recall from Volkswagen includes cars from 2014, and a recent Honda recall has a 2016 model.

"Recent events and recalls involving relatively new vehicles with these types of inflators raise serious questions as to whether Takata's ammonium nitrate propellant is inherently dangerous," Nelson wrote to Rosekind. "I am concerned that the current approach may be needlessly incremental and fail to adequately protect public safety."

Until they're all recalled and fixed "people are going to keep dying," he says.

Takata maintains that most of its inflators are safe, but says it agreed with government demands to stop making those with ammonium nitrate by 2018 — except for inflators with a drying agent.

All of the deaths have been caused by driver's inflators, and NHTSA's Trowbridge says all but a few thousand of those without a chemical added to keep them dry have been recalled. That means most of the unrecalled inflators are on the passenger side, where there have been fewer serious injuries.

Still, the piecemeal approach to recalls has allowed the population of Takata inflators to grow so large that a total recall wouldn't immediately fix the problem because replacements can't be manufactured fast enough.

Takata says it and other suppliers can make up to 1.5 million replacement inflators per month, meaning up to 18 million a year. But some of those must go to other countries, where about 30 million more inflators are being recalled.

In the U.S., it would take about four years to replace inflators now under recall.

So far, automakers have replaced about 5 million inflators. That low rate is due both to the limited number of inflators and to an issue common to most recalls: People don't take their cars in for repairs, even with a problem this serious.

Two other senators want to make sure everyone with a Takata inflator can get a replacement.

Sens. Richard Blumenthal of Connecticut and Edward Markey of Massachusetts, in a separate letter this month, asked NHTSA to recall all the inflators and force Takata to publish all makes and models for which it has supplied air bags since 2000. The public also should be allowed to see inflator test results, they said.

"Every consumer deserves to know whether their vehicle could be lethal in a fender-bender," the senators wrote.