The ignition switches in question can slip out of the on position, causing the cars to stall, knocking out power steering and turning off airbags. 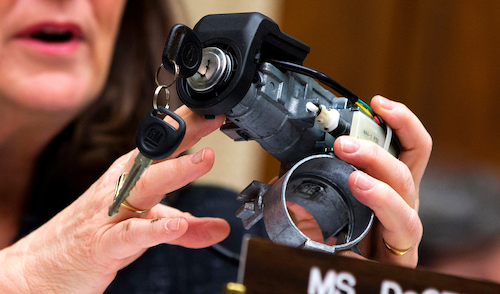 A trial that was supposed to help settle hundreds of lawsuits stemming from General Motors' faulty ignition switches was headed for a premature dismissal Friday, a day after the judge raised questions about the truthfulness of the plaintiff.

Both sides in the dispute said they would ask a judge to dismiss the case involving Robert Scheuer, an Oklahoma man whose air bags didn't inflate when his car crashed in 2014.

"We said all along that each case would be decided on its own merits, and we had already started to show by strong, clear and convincing evidence to the jury that the ignition switch didn't have anything to do with Mr. Scheuer's accident or injuries," General Motors said in a statement. "The apparent lies the plaintiff and his wife told the jury ended the trial early, and we are pleased that the case is over without any payment whatsoever to the Mr. Scheuer."

Scheuer's lawyer, Robert C. Hilliard, said it was disappointing that the trial was ending, "especially one such as this where the concerns regarding the underlying safety of certain GM's vehicles are legitimate and real."

Hilliard said the overall litigation involving other plaintiffs would continue.

On Thursday, Furman had said that Scheuer's case against Detroit-based GM was "almost worthless as a settlement tool." He urged both sides to consider whether it was sensible to begin focusing on five other bellwether trials scheduled for later this year.

Scheuer, of Tulsa, had said he suffered injuries when his air bags failed to deploy after another car ran his 2003 Saturn Ion off a rural road on May 28, 2014.

Since early 2014, GM has issued recalls affecting more than 30 million vehicles. The recalls came long after GM learned of the ignition switch defect in Chevy Cobalts and other small cars. The switches can slip out of the on position, causing the cars to stall, knocking out power steering and turning off air bags. GM says it has fixed the problem.

At the trial's start, GM attorney Mike Brock said GM's probe of the accident revealed that Scheuer was not honest about his claims.

The lawyer noted that Scheuer, a mail man, had a two-decade history of surgeries and pain medication prescriptions for spinal issues. He also said two calls to Scheuer's cellphone messaging system from his phone contradict his claims he was unconscious for three hours after the accident.

Scheuer's lawyer didn't dispute GM's claims directly but argued they were being made too late.