The company plans to have two-thirds of its U.S. store hourly jobs be full time by Jan. 31. 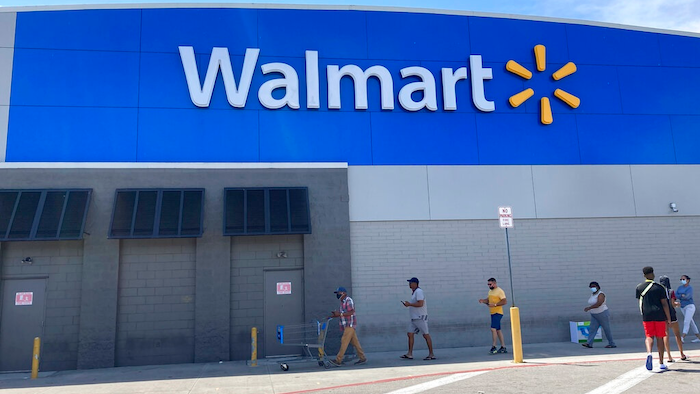 Customers wait in line outside a Walmart Supercenter store, due to COVID-19 restrictions on store capacity, Wednesday, April 7, 2021, in Miami. Walmart is moving more of its workers full time, with the goal of having two-thirds of its U.S. store hourly jobs be full-time with more consistent work schedules by early next year. With this move, announced Wednesday, April 14, the nation’s largest private employer says it will have 740,000 of its 1.2 million U.S. Walmart hourly store workers be full-time by Jan. 31.
AP Photo/Wilfredo Lee

The company said Wednesday it plans to have two-thirds of its U.S. store hourly jobs be full time with more consistent work schedules by Jan. 31, the end of its current fiscal year. That’s up from 53% five years ago, the company said.

With the move, Walmart will have 740,000 of its 1.2 million U.S. Walmart hourly store workers working full time by early next year. That would mean it will have about 110,00 more full-time workers than it did five years ago. Walmart employs roughly 1.5 million workers in the U.S. including those at Sam’s Club, distribution centers and in corporate and managerial jobs.

Drew Holler, Walmart's senior vice president of U.S. people operations, told The Associated Press Wednesday that workers are demanding full-time jobs, which have better health and dental benefits. Holler also noted that full-time work offers the Bentonville, Arkansas-based retailer a competitive edge as it's able to retain and attract better employees in a fiercely competitive environment. The moves also come as the exploding pickup and delivery businesses are calling for more full-time jobs as Walmart's stores operate both as fulfillment centers and retail spaces.

“We know offering more full-time opportunities along with skills training and equipping associates with tools to make work easier will help us continue to attract and retain top talent," Holler wrote in a corporate blog.

Walmart's increasing focus on full-time jobs also comes as it's creating a team-based structure in its stores where groups of eight to 12 workers work together in an area like toys or clothing and get cross-trained.

Walmart considers any employee working 34 hours or more a week full time, although anyone working 30 hours a week or more is eligible for health coverage. With team scheduling, Walmart workers will have consistent 39 to 40-hour schedules, the retailer said.

But Walmart’s has been criticized by labor-backed groups and its own workers for lagging behind retailers like Target, Amazon and Costco. Costco just raised its minimum hourly wage to $16, while the starting pay at Target and Amazon is $15 per hour. Walmart last raised its entry-level wages for U.S. hourly employees to $11 in early 2018, though it's been raising starting wages for certain jobs. Holler says Walmart is focusing more on creating clear pathways with better training so workers can move up the ladder.

Cynthia Murray, a 20-year associate in Hyattsville, Maryland, and member of United for Respect, a worker advocacy group, says she's encouraged that more workers at Walmart will be full-time. But she says the company needs to take “greater action to respect us."

“If Walmart truly wants to retain associates and offer ‘stability and room for growth’ we are happy to meaningfully engage with them on our requests, which include moving to a full $15 minimum wage for all employees immediately, cost-of-living increases to longtime employees, and giving us a seat on the board," she wrote in an emailed statement.

The approach toward full-time staffing also comes as online behemoth Amazon recently faced the biggest union push in its history. Walmart Inc. declined to comment on whether its efforts were a way to head off any similar efforts.

Holler said that the full-time staffing approach that has been successful in Walmart's distribution centers and fulfillment centers, where more than 80% of its workers are full-timers.

Mark Mathews, vice president of research development and industry analysis at the National Retail Federation, the nation's largest retail trade group, said that a decade ago there was a move among retailers toward part-time workers. In fact, 31% of retail and wholesale workers, excluding warehouse workers, were part time in 2010, according to his analysis of government figures.

But in recent years, that number has been declining as the popularity of online shopping has lessened the need to staff workers at odd hours. In 2017, the percentage of part-time workers dropped to 27%, but then rose to 29% last year because of the pandemic.