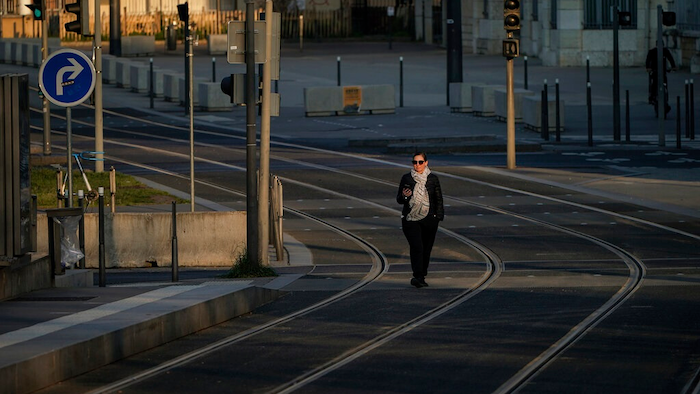 A woman walks on empty tram rails in Lyon, central France, Monday, March 23, 2020. French citizens are only allowed to leave their homes for necessary activities such as shopping for food, going to work or taking a quick walk due to the rapid spreading of the new coronavirus in the country. For most people, the new coronavirus causes only mild or moderate symptoms. For some it can cause more severe illness, especially in older adults and people with existing health problems.
AP Photo/Laurent Cipriani

The rapid spread of the coronavirus since it was first reported in China has dealt an unprecedented shock to the global economy.

Here's a look at developments Tuesday as central banks, businesses and workers attempt to navigate a global outbreak that has brought economic activity to a standstill.

WAR CHEST: With the duration of the global outbreak unknown, the largest corporations in the world are cancelling dividends, slashing costs and withdrawing financial outlooks.

Chevron slashed its 2020 capital spending plan by 20% Tuesday, or about $4 billion. Chevron Corp. said Tuesday that it's also looking to lower run-rate operating costs by more than $1 billion by the end of the year. Investors count on steady dividends from big energy producers, and Chief Financial Officer Pierre Breber said protecting payouts to shareholders is a priority.

Nordstrom suspended its quarterly dividend and the luxury retailer said in a regulatory that stock buybacks are suspended. Those buybacks can drive share prices higher, but it also means companies don't have cash on hand, which is crucial right now. To that end, Nordstrom is drawing down $800 million from a revolving credit line. It doubled down on cost-cutting initiatives. It's initial savings plan of up to $250 million this year, has been expanded to more than $500 million.

REPURPOSING: Ford has partnered with 3M and GE Healthcare to create more medical equipment and supplies for healthcare workers, first responders and patients. Ford and 3M will attempt to produce powered air-purifying respirators, expand It is teaming with GE Healthcare to expand production of a simplified version of GE Healthcare’s existing ventilator design to help patients with respiratory failure or difficulty breathing. It is also assembling more than 100,000 plastic face shields per week at one of its manufacturing sites and will also use its in-house 3D printing capability to make components for use in personal protective equipment.

TO YOUR HEALTH: The spread of the coronavirus has changed life as the world knew it, and that includes how we imbibe.

Money once spent on booze in pubs, restaurants are bars, is going to six-packs or cases of wine and beer consumed at home, according to a regulatory filing Tuesday by Constellation Brands. Cities from San Francisco to New York have shut down the places where people gathered, at best allowing pick-up or delivery. Orders for alcohol meant to be consumed outside of bars or restaurants spiked by 30% over the past four weeks at Constellation Brands, the maker of, among other things, Corona beer. Constellation, which also makes Funky Buddha beer, and wines like Clos du Bois and Robert Mondavi, as well Casa Noble Tequila, and High West Whiskey, is shifting operations to accommodate home drinking.