California's Department of Motor Vehicles will miss a year-end deadline to adopt new rules for cars of the future because regulators first have to figure out how they'll know whether "driverless" vehicles are safe. 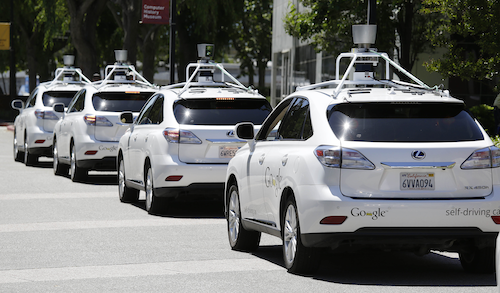 LOS ANGELES (AP) — California's Department of Motor Vehicles will miss a year-end deadline to adopt new rules for cars of the future because regulators first have to figure out how they'll know whether "driverless" vehicles are safe.

It's a rare case of the law getting ahead of an emerging technology and reflects regulators' struggle to balance consumer protection with innovation.

Safety is a chief selling point, since self-driving cars — thanks to an array of sensors — promise to have much greater road awareness and quicker reaction time than people. Plus, they won't text, drink or doze off.

Though the cars are at least a few years away from showrooms, seven companies are testing prototypes on California's roads, and regulators have questions: Do they obey all traffic laws? What if their computers freeze? Can they smoothly hand control back to human drivers?

DMV officials say they won't let the public get self-driving cars until someone can certify that they don't pose an undue risk. The problem is that the technology remains so new there are no accepted standards to verify its safety. Absent standards, certifying safety would be like grading a test without an answer key.

Broadly, the department has three options: It could follow the current U.S. system, in which manufacturers self-certify their vehicles; it could opt for a European system, in which independent companies verify safety; or the state could (implausibly) get into the testing business.

"It's a huge undertaking," said Bernard Soriano, who oversees the DMV's regulatory process. "There are all of these issues that need to be adequately answered."

Manufacturers generally would prefer self-certification. That may be where California ends up, but for now the DMV is exploring independent certification — something that doesn't exist for driverless cars.

In July, the DMV asked third-party testers whether they'd be interested in getting into the game. The department doesn't have the expertise to create a safety standard and testing framework, so "the department wanted to get a very good sense of what is out there in the market," according to Russia Chavis, a deputy secretary at the California State Transportation Agency, which oversees the DMV and requested a deeper exploration of third-party alternatives to self-certification.

Two large European testers and two businesses in Ohio responded to the DMV's request. None was ready to implement a program immediately.

So the department is asking industry, consumer groups and other interested parties to gather in January for a public workshop on safety standards.

Whatever course California officials take could influence how other states — and perhaps even the federal government — approach the issue. California is such a large consumer market that in many cases its rules become de facto national standards.

Federal transportation officials have said they don't plan to write driverless car safety standards any time soon, and they don't want states writing their own. SAE International, an association of engineers, has been developing a set of safety guidelines — but those are for vehicle testing and don't get into specific performance levels that would be needed for commercially available cars.

California's Jan. 1 deadline was set by a 2012 state law that regulated testing on public roads and required the DMV to publish rules guiding what carmakers need to do before they can bring the vehicles to market. The law also says the DMV should encourage the development of driverless cars.

Regulations often lag cutting-edge technology, but California's driverless car policy has developed sooner because of lobbying from one of the state's signature companies: Google.

Self-driving vehicles are a departure from the Silicon Valley giant's Internet search and advertising core, but a priority for co-founder Sergey Brin.

Even before Google pushed the 2012 law that officially legalized driverless technology, the Silicon Valley giant had dispatched its cars hundreds of thousands of miles. Google says its Toyota Priuses and Lexus SUVs, souped up with radar, cameras and laser sensors, have an excellent safety record. They have been involved in just a "few" accidents, though not at fault in any of them, spokeswoman Courtney Hohne said.

Google has its own idea for how to determine whether vehicles are safe.

"I would be cautious," he said, "not to make some of these things more complicated than they are."