The United States claimed progress Wednesday with China on currency issues and toward negotiating a code of conduct for cyberspace after two days of high-level talks that underscored sharp differences but paved the way for a visit by China's leader in the fall. 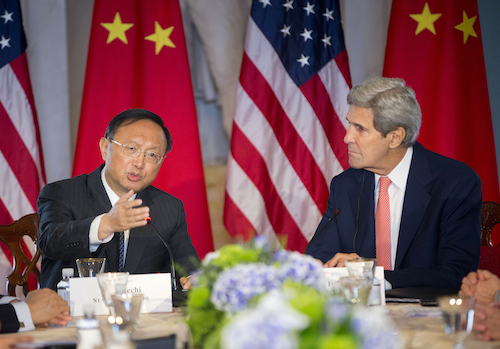 WASHINGTON (AP) — The United States claimed progress Wednesday with China on currency issues and toward negotiating a code of conduct for cyberspace after two days of high-level talks that underscored sharp differences but paved the way for a visit by China's leader in the fall.

President Barack Obama rounded out the annual U.S.-China Security and Economic Dialogue by raising concerns to leaders of the Chinese delegation about Chinese cyber behavior and tensions over disputed seas of East Asia that have weighed on efforts by the two powers to forge a more cooperative relationship.

"He urged China to take concrete steps to lower tensions," the White House said in a statement after the meeting.

While Secretary of State John Kerry described the U.S.-China as "ascending," he said cyber intrusions have raised security questions and harmed U.S. businesses. He said the two countries should be working together for a shared understanding of appropriate state behavior in cyberspace.

Kerry said there are acceptable international norms of behavior. "We need to work together in order to define those, and then live by them. I think that message was clearly delivered and received and hopefully that work will begin in earnest very, very quickly," he told reporters.

In the past two years, mounting U.S. pressure on cyber issues has had little apparent impact on Chinese behavior. Obama raised it directly with Chinese President Xi Jinping when he last visited the U.S. in 2013, but allegations of state-backed cybertheft and espionage have only intensified.

Administration officials have said they are increasingly confident that China's government was responsible for a massive breach of personnel records of as many as 14 million of federal employees and contractors. But the administration has stopped short of publicly blaming the break-in on China.

State Councilor Yang Jiechi said China cracks down on hacking and is ready to cooperate with the U.S. on cybersecurity. But he urged the U.S. to "respect facts." China has directly denied involved in the massive breach of date from the U.S. Office of Personnel Management.

He acknowledged that the renminbi, or RMB, has appreciated in value and said that China's foreign exchange intervention has declined over the past year. He said China has committed to intervene in the foreign exchange market only when necessitated by disorderly market conditions.

But he added that the "real test" would be when there's upward pressure on the RMB.

"Will China refrain from intervening? That is still an open issue," Lew said. "They still need to work toward having a fully market-determined exchange rate."

He also voiced U.S. concerns over access to Chinese markets, and said the two sides had a long way to go in negotiating a bilateral investment treaty. He said they had agreed to narrow their respective lists of sectors that would be exempted from foreign investment by early September, when Xi visits Washington.

China pushed back against U.S. criticism of its conduct in the South China Sea, where its assertive behavior and land reclamation to advance its territorial claims have rattled its Asian neighbors, U.S. allies among them. China says the disputed areas are its sovereign territory.

Washington took the unusual step last month of publicizing a U.S. military surveillance flight that showed the massive scale of China's island-building, which critics also say is damaging to the marine environment.

"There is no crisis in the South China Sea," said Zheng Zeguang, assistant minister of foreign affairs, adding that China's behavior was "beyond reproach." He said it should not be an issue between the U.S. and China because the U.S. is not a claimant.

Despite their differences on maritime security, the U.S. and China said Wednesday they are stepping up cooperation on preserving the ocean and combating illegal fishing in the North Pacific. Both sides are also emphasizing their joint efforts on combating climate change.