Mondelez Investor Could Push For Sale

A prominent activist investor likely believes that snacks giant Mondelez could be the next casualty of ongoing consolidation in the food industry. 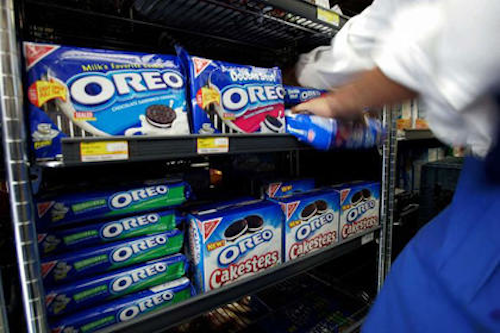 A prominent activist investor likely believes that snacks giant Mondelez could be the next casualty of ongoing consolidation in the food industry.

Reports said that William Ackman's Pershing Square Capital will become a major shareholder in Mondelez after building a $5.5 billion stake in the owner of Oreo cookies and Ritz crackers.

Mondelez is among several large food companiestaking steps to curb costs as consumers continue to shift away from packaged and processed foods. Analysts, however, said that Ackman's involvement could foreshadow greater efforts to increase profits — or an attempt to sell the company.

The list of companies in the food industry that could afford Mondelez, which is valued at about $80 billion, is slim. Reports mentioned the newly merged Kraft Heinz and PepsiCo as potential suitors, although analysts were initially skeptical about both companies making such a large acquisition.

The company said that it welcomed Pershing's involvement and would "continue to focus on executing our strategy and on delivering value for all our shareholders."