U.S. productivity rose at a moderate pace in the April-June quarter as growth picked up and hiring remained steady. 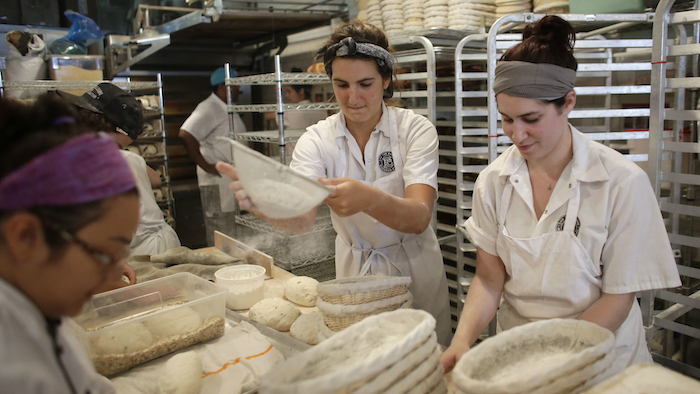 WASHINGTON (AP) — U.S. productivity rose at a moderate pace in the April-June quarter as growth picked up and hiring remained steady.

The Labor Department says worker productivity increased at a seasonally adjusted annual rate of 1.3 percent, up from a drop of 1.1 percent in the first quarter. The first quarter's decline was revised sharply higher from a previous estimate of a 3.1 percent decline.

The second quarter rebound occurred mostly because the economy grew faster: It expanded at a 2.3 percent annual rate, compared with the first quarter's anemic 0.6 percent growth.

Productivity is a gauge of how efficient workers are. It measures the output of goods and services for each hour worked. Strong productivity growth can boost wages and economic growth.

Yet productivity growth has been sluggish since the recession. It has expanded just 0.3 percent in the past year. That is far below the long-run average of 2.2 percent.

And productivity growth was even weaker in 2012 and 2013 than previously thought. The government revised the previous three years' data to incorporate recent changes in its estimates of economic growth.

As a result, worker productivity was flat in 2013, down from a previous figure of 0.9 percent growth. That is the weakest showing since 1982. In 2012, productivity growth was revised down to 0.9 percent from 1 percent.

Labor costs, meanwhile, crept up just 0.5 percent in the second quarter, a sign that wages are rising only modestly. Labor costs increased 2.3 percent in the first quarter, sharply lower than the previous estimate of 6.7 percent.

Rising labor costs can be a precursor of inflation. Yet they have been mostly sluggish since the recession. Companies haven't had to increase pay much to hold onto workers.

The weak productivity growth in recent years has largely puzzled economists. It has risen an average of just 1.3 percent a year from 2007 through 2014.

That's far below the strong 2.8 percent average annual growth that occurred from 1995 through 2004, which largely reflected a boost from the widespread use of computers and the Internet.

Some experts believe that improvements in software and other high-tech products aren't being accurately measured by the government's statistics, which were formulated when manufacturing, agriculture and other tangible goods accounted for a bigger share of the economy.

Other economists argue that companies haven't yet figured out how to fully exploit smartphones, tablets and other recent innovations. Productivity should increase as they learn to do so. And still others point out that companies have been reluctant since the recession to invest in large equipment such as industrial machinery, which could boost their employees' productivity.