A federal judge refused to dismiss a lawsuit by a Seattle artist who says she was cheated out of millions of dollars when the company that sold her line of plush pet toys called "Angry Birds" reached a deal with the Finnish company that makes the insanely popular video game of the same name. 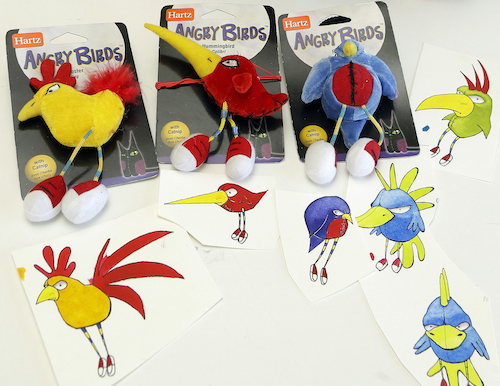 SEATTLE (AP) — A federal judge refused to dismiss a lawsuit by a Seattle artist who says she was cheated out of millions of dollars when the company that sold her line of plush pet toys called "Angry Birds" reached a deal with the Finnish company that makes the insanely popular video game of the same name.

Juli Adams designed the "Angry Birds" toys in 2006 for The Hartz Mountain Corp., a New Jersey-based pet products company. Three years later, she says in her lawsuit, Hartz licensed her intellectual property to game-maker Rovio Entertainment without telling her.

Adams says Rovio wanted to market plush pet toys based on the game — just as it had already done with "Angry Birds" golf-club covers, theme parks and innumerable other items — but it couldn't because Adams' work already had the U.S. trademark for "Angry Birds" pet toys.

Hartz stopped making the toys based on Adams' designs and started making them for Rovio based on the video game characters.

The company asked U.S. District Judge Robert Lasnik to dismiss the case, arguing that under its contract with Adams, it owned the "Angry Birds" trademark and was free to use it.

But Lasnik declined. In an order Monday, he said Adams makes a plausible case that she retained intellectual property rights in the "Angry Birds" trademark.

"They had an obligation to treat Juli fairly and not throw her off for someone else," Adams' attorney, Anthony Shapiro, said Tuesday.

Adams has not so far claimed that the birds-versus-pigs video game, which has been downloaded more than 2 billion times, is based on her work. But Shapiro has said there are similarities in the designs, including in the colors, eye shape and "Angry Birds" logo font.

He said he has sent document requests to Rovio and is negotiating with the company over those requests. Rovio has previously declined to comment on Adams' lawsuit, noting that it is not a party to it.

Adams was showing her artwork at a festival in Montana in 2006 when a vacationing Hartz executive walked up. The executive, who was then the director of marketing for Hartz's accessory division, asked if Adams would be interested in designing a line of pet toys for the company.

She told The Associated Press last summer, when her lawsuit was filed, that she jumped at the chance because it sounded like fun. She came up with "Angry Birds" based on the idea of a plush toy that wouldn't be pleased about being attacked by her cats.