T-Mobile US will pay at least $90 million, mostly in refunds, for billing customers for cellphone text services they didn't order, under a settlement with federal regulators. 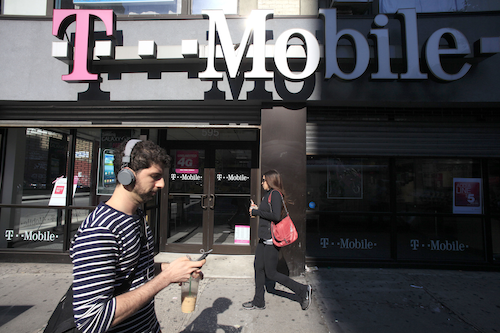 WASHINGTON (AP) — T-Mobile US will pay at least $90 million, mostly in refunds, for billing customers for cellphone text services they didn't order, under a settlement with federal regulators.

The FTC sued T-Mobile in July, accusing it of billing customers for subscriptions to text services like $9.99-per-month horoscopes, ringtones, "flirting tips" or celebrity gossip updates that they didn't want or authorize.

T-Mobile collected 35 percent to 40 percent of the charges, even after being alerted by customers that they were bogus, the FTC alleges. That earned the company hundreds of millions of dollars, the agency said.

"We learned during this case that T-Mobile was in bed with the crammers," said Travis LeBlanc, head of the FTC's enforcement bureau. He was referring to the third-party companies that put charges on phone bills for text services. Many consumers aren't aware that third-party companies can do that, the regulators say.

Officials told reporters on a conference call that the $90 million was a floor, not a maximum, for the amount that T-Mobile could end up paying. "It could be well north of $100 million," said Bill Sorrell, the attorney general of Vermont.

A T-Mobile spokeswoman said the company had no immediate comment on the settlement. T-Mobile began a refund program in July and has said it has notified current and former customers. The company didn't provide an estimate of how much it has paid in refunds to date.

T-Mobile US Inc., based in Bellevue, Washington, is controlled by Germany's Deutsche Telekom AG. It's the No. 4 U.S. cellphone carrier after Verizon Wireless, AT&T Mobility and Sprint.

The settlement must be approved by a federal court in Seattle, where the FTC filed its lawsuit.

Under the settlement, T-Mobile must provide full refunds to all its customers affected by the "cramming," and the amount it pays in refunds and fines must reach at least $90 million. If the payout doesn't reach that amount, the difference between what T-Mobile pays and $90 million will go to the FTC for additional relief to consumers, consumer education or other uses.

T-Mobile also must contact all of its affected customers, both current and former, to tell them about the refund program and how they can make a claim. That must be done in a "clear and conspicuous way," the FTC said. Going forward, T-Mobile must get customers' explicit consent before putting third-party charges on their bills. The company must clearly indicate any third-party charges on the bills.

The T-Mobile agreement is the second-largest settlement for the government over mobile cramming. In October, AT&T Mobility agreed to a $105 million settlement with the FTC. Officials said that with the two settlements, about half of all U.S. cellphone users now will be protected from abusive third-party charges.

"Mobile cramming is an issue that has affected millions of American consumers, and I'm pleased that this settlement will put money back in the hands of affected T-Mobile customers," FTC Chair Edith Ramirez said in a statement Friday. "Consumers should be able to trust that their mobile phone bills reflect the charges they authorized and nothing more."