One of three Fed officials who dissented in the Fed's policy decision this week is warning that the central bank is taking an "unacceptable" risk by not paying more attention to the dangers posed by low inflation. 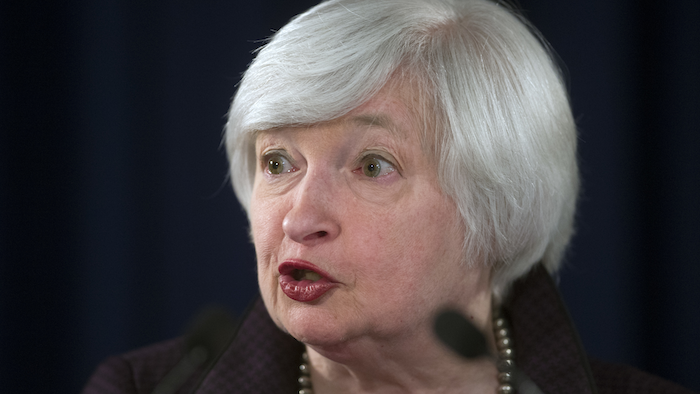 WASHINGTON (AP) — One of three Fed officials who dissented in the Fed's policy decision this week is warning that the central bank is taking an "unacceptable" risk by not paying more attention to the dangers posed by low inflation.

Narayana Kocherlakota, the president of the Fed's regional bank in Minneapolis, said Friday that the Fed's failure to respond to weak inflation "runs the risk of creating a harmful downward slide in inflation" similar to the problems facing Japan and Europe.

Meanwhile, Philadelphia Fed President Charles Plosser, another dissenter at this week's meeting, is unhappy for a different reason. He feels the Fed is making a mistake by saying it will still be patient in deciding when to begin raising interest rates.

Plosser said it was an error to use the word "patient" and also to say that current policy had not changed from the October meeting when the Fed was saying that rates would remain near a record low for "a considerable period."

"Whether saying we will be patient or we will wait a considerable time, the language continues to stress the passage of time as a key determinant of policy," Plosser said. "Such date-based guidance is problematic since policy should be determined by the data."

Both Plosser and Kocherlakota issued statements explaining their votes on the Fed's decision, which was approved 7-3. Dallas Fed President Richard Fisher did not issue a statement elaborating on his "no" vote.

The three dissents were the most since 2011 and underscored the sharp divisions inside the Fed as it transitions from an extended period of ultra-low rates to a period in which it will start to raise rates.

Both Plosser and Fisher are leading hawks, Fed officials who believe the central bank should be focused more on the dangers that its prolonged period of low-interest rates could trigger higher inflation in the future.

Kocherlakota is one of the most vocal doves, the group of Fed officials who believe that even though the labor market has begun to recover from the Great Recession, wage growth is still weak and the danger is that prices are rising too slowly, not that they are rising too quickly.

Kocherlakota, who also dissented at the October meeting, said he would have preferred the Fed to state that it plans to keep a key short-term interest rate unchanged as long as the outlook for inflation remains below the Fed's 2 percent inflation target.

The Fed has kept its target rate at a record low near zero for six years. Many private economists believe with the economy improving, the Fed is moving closer to raising rates but will not do so until June.

San Francisco Fed President John Williams said in an interview Friday with Bloomberg Radio that he agreed with the comments Fed Chair Janet Yellen made in her news conference Wednesday when she said that using the word "patient" means interest rate increases are unlikely to occur over the next two Fed meetings.