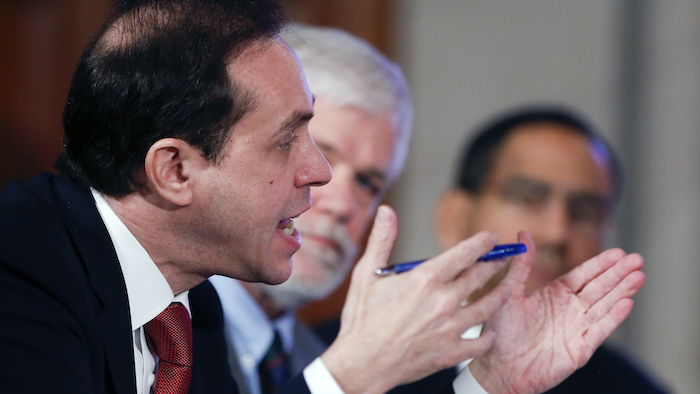 ALBANY, N.Y. (AP) — New York plans to prohibit hydraulic fracturing, or fracking, citing unresolved health issues and dubious economic benefits of the widely used gas-drilling technique and delighting opponents who previously managed to win only local bans.
New York, which overlies part of the gas-rich rock formation that has also led to a drilling boom in nearby states, has banned shale gas development since the state began its environmental review in 2008. Wednesday's announcement, though not final, means a ban is all but etched in stone.
"Never before has a state with proven gas reserves banned fracking," said Deborah Goldberg, an attorney with Earthjustice, adding that the decision "will give courage to elected leaders throughout the country and world: fracking is too dangerous and must not continue."
Industry representatives expressed disappointment but also have downplayed New York's potential as a major source of natural gas.
"We are very disappointed that it appears the governor is unwilling to be a leader and is going to pass the buck at the expense of New Yorkers," said Jack Gerard, president of the American Petroleum Institute. "This technology has been used for over 65 years in the United States. It's been demonstrated repeatedly after drilling millions of wells that we're able to do it while protecting the environment and protecting the people."
Environmental Commissioner Joe Martens said Wednesday that he was recommending a ban, and Gov. Andrew Cuomo, a Democrat, said he would defer to Martens and Acting Health Commissioner Howard Zucker on the decision.
The Department of Environmental Conservation will put out a final environmental impact statement early next year, Martens said, and after that he'll issue an order prohibiting fracking.
Zucker and Martens on Wednesday summarized environmental and health reviews that concluded fracking carried risks that haven't been studied enough.
The drilling boom in the Marcellus Shale, a rock formation underlying southern New York, Pennsylvania, Ohio and West Virginia, was made possible by high-volume hydraulic fracturing, which releases gas from rock by injecting wells with chemically treated water at high pressure.
The technique has generated tens of billions of dollars in industry profits and landowner royalties, and has reduced energy bills and fuel imports. But it has also brought concerns and sparked protests over air and water pollution, earthquakes, property devaluation, and truck traffic.
Zucker said he had identified "significant public health risks" and "red flag" health issues that require long-term studies before fracking can be called safe. He likened fracking to secondhand smoke, which wasn't fully understood as a health risk until many years of scientific study were done.
Martens noted the low price of natural gas, the high local cost of industry oversight, and the large areas that would be off limits to shale gas development because of setback requirements, water supply protections and local prohibitions. Those factors, he said, combine to make fracking less economically beneficial than anticipated.
Even if drilling were allowed in New York, it wouldn't likely take off anytime soon because of the uncertainty around regulations and legal challenges, and the huge amount of promising drilling locations that remain in fracking-friendly neighbor Pennsylvania, said David Spigelmyer, president of the industry group Marcellus Shale Coalition.
The location of the rock entices producers because of its proximity to the major demand centers of New York City and New England, which is paying more for gas because of delivery constraints. But the uncertainty remains too high to commit.
In states where fracking is not yet allowed or is happening but subject to criticism, New York's move excited some anti-drilling activists.
"The more fracking expands, the more opposition grows," said Sharon Wilson, of the group Earthworks, who has organized anti-fracking activists in Texas, California and Colorado. "Industry is its own worst enemy because they continue to deny the impacts."
Fracking supporters decried the New York move. Karen Moreau, executive director of New York's branch of the American Petroleum Institute, said the Cuomo administration is denying landowners the right to develop their mineral resources.
"The secretary of energy, the U.S. EPA administrator and President Obama recognize the benefits of fracking, and yet the Cuomo administration simply did not want to anger their activist base," Moreau said.
Cuomo said he is anticipating lawsuits being filed "every which way from Sunday."
___
Associated Press writers Jon Fahey in New York and Emily Schmall in Dallas contributed to this report.