As oil's long slide continued, the Energy Department forecast Tuesday that production from U.S. shale operators will begin to tail off in the second half of the year. 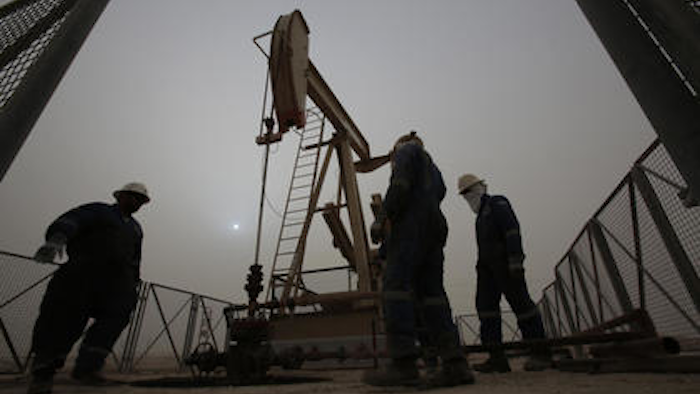 NEW YORK (AP) — As oil's long slide continued, the Energy Department forecast Tuesday that production from U.S. shale operators will begin to tail off in the second half of the year.

The decline would mark the first such drop in what has been a 6-year boom in U.S. onshore crude production.

The price of oil fell Tuesday, dipping briefly under $45, before ending down 18 cents to $45.89 a barrel. That's the lowest since the spring of 2009, and a drop of 58 percent over the past six months.

Oil fell after the energy minister for the United Arab Emirates, a member of OPEC, suggested that the cartel will not lower production to reduce global supplies in an effort to reverse falling prices.

Brent crude, an international benchmark used to price oil used by many U.S. refineries, fell 84 cents to close at $46.59 a barrel in London.

Typical U.S. households will spend $750 less on gasoline this year than in 2014, because the average gasoline price will fall to $2.33 per gallon, from $3.36 last year, the Energy Department also forecast Tuesday.

The national average stood at $2.12 a gallon Tuesday, according to AAA, the lowest in nearly 6 years.

The forecast was part of a monthly outlook released by the Energy Department's Energy Information Administration. It was EIA's first outlook to include forecasts for 2016.

Onshore fields in North Dakota, Texas and elsewhere have driven the enormous increase in U.S. crude oil production over the past 6 years. That rise, combined with more supplies from Iraq, Canada and elsewhere, is the main factor pulling down global oil prices.

"Many oil companies have cut back on their exploration drilling in response to falling crude prices," EIA Administrator Adam Sieminski in a statement.

For the year, average U.S. production, including output from Alaska and the Gulf of Mexico, is still expected to rise, but by the slowest rate in four years. If oil prices rise as expected in 2016, onshore oil production should climb again, and reach 9.5 million barrels per day, the second highest ever, after 1970's record 9.6 million barrels.

But the EIA says it is a particularly tough time to predict future prices, especially in distant months. The market signals that the agency uses to forecast prices are all over the place, and that uncertainty limits its ability to predict production levels.

EIA forecasts that the average global price of crude will be $58 in 2015, and rise to $75 next year as demand for oil increases and global supply growth slows. But to illustrate the uncertainty in the market, it said December oil prices could range between $28 and $112 per barrel.

Traders expect oil prices to rise again, but are struggling to guess when, and by how much. Many expect oil to fall further before turning around.

U.S. crude could go as low as $40.25 a barrel, says energy consultancy Ritterbusch and Associates. Jim Ritterbusch, the firm's president, wrote in a note to investors Tuesday that he sees "little support" for oil this week.

"Each successive trading session seems to bring a new bearish impetus," he wrote.

In other futures trading on the NYMEX: