Drivers trying to calculate whether it's practical to own an electric car are facing a new math. 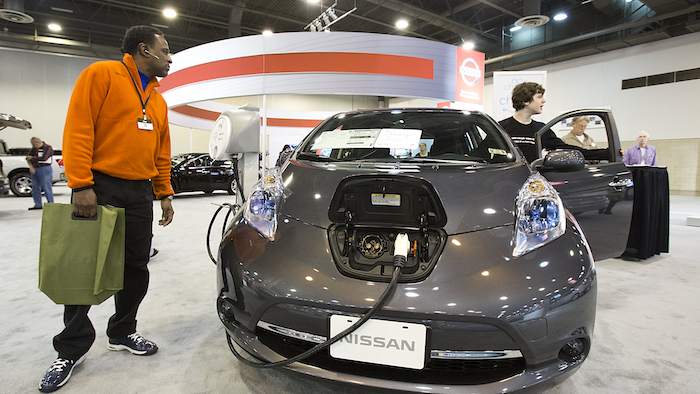 DETROIT (AP) — Drivers trying to calculate whether it's practical to own an electric car are facing a new math.

U.S. gas prices have fallen more than $1 per gallon over the last 12 months, to a national average of $2.06, according to AAA. That makes electric cars — with their higher prices tags — a tougher sell.

"Fuel savings are not top of mind to many consumers right now," says John Krafcik, president of the car shopping site TrueCar.com.

Automakers have responded by slashing thousands of dollars off the sticker price of electrics. Incentives averaged $4,159 per electric car last year, up 68 percent from 2013, according to Kelley Blue Book. The average for all vehicles was $2,791.

The discounting, combined with new vehicles such as the BMW i3, the electric Kia Soul and the Mercedes B Class, boosted sales of electrics 35 percent last year, according to Ward's AutoInfoBank. But the gains came before gas prices plunged in the second half.

So the discounting will likely continue. In January, the electric version of the Ford Focus was selling for an average of $25,168, or 16 percent lower than the sticker price of $29,995, according to TrueCar.

Here's how the numbers break down:

Federal and local incentives can narrow the gap. New electric cars — whether bought or leased — qualify for a $7,500 federal tax credit, and many states offer additional tax credits or other incentives. California offers a $2,500 cash rebate to electric car buyers, for example.

With the federal tax credit, it would take five years to pay off the difference in price for an electric Focus at current fuel prices.

Most electric buyers choose to lease, which lets them see the tax credit immediately because it's factored into their lease price. Nissan is currently offering the Leaf for $199 per month for 36 months. For the same amount, a driver could get a gas-powered Ford Escape SUV or a Honda Accord sedan; a Nissan Sentra small car leases for $149 per month.

FUELING COST: Even when gas prices hover around $2, it's cheaper to charge an electric car. Residential electricity averages 12 cents per kilowatt hour nationally; at that price, it costs around $550 per year to charge the Nissan Leaf for 15,000 miles of driving. At $2.06 per gallon, it costs $950 per year to fill the similarly sized, gas-powered Sentra, which averages 33 mpg; at $4 per gallon, it would cost $1,816.

But costs can vary. Model S drivers, for example, can use Tesla's network of free Superchargers, which can charge a Model S battery in a matter of minutes. Power companies may offer reduced rates to owners who charge their vehicles during off-peak hours. And some owners leave the grid altogether and power their electric cars with solar energy.

RESALE VALUE: Electric cars don't hold their value well, in part because of their higher up-front cost. Incentives, which can inflate demand and cheapen a car's image, won't help. Consumers are also wary of new technology and are less willing to take a chance on used electric cars, despite battery warranties of up to eight years. Kelley Blue Book says electric cars have the lowest residual value of any segment, at around 20 percent of the purchase price after 60 months. Full-size trucks, by comparison, hold 50 percent of their value.

RANGE: This is where the balance generally tilts in favor of gas-powered cars. A top-of-the-line Tesla can go up to 270 miles before it needs recharging, but most electric cars settle in the 80-mile range. Uncertainty about range and the spotty charging infrastructure have limited electric car sales to less than 1 percent of the U.S. market.

But interested buyers could have more choices soon. Technology is rapidly improving, and both Tesla and General Motors are promising lower-priced cars with a 200-mile range by 2017. That might be just in time for rising gas prices.