Apple CEO Tim Cook says consumer demand for new iPhones has been "staggering" and "hard to comprehend." That helped the company report record-smashing earnings for its latest quarter and primed its stock for a rally Wednesday. 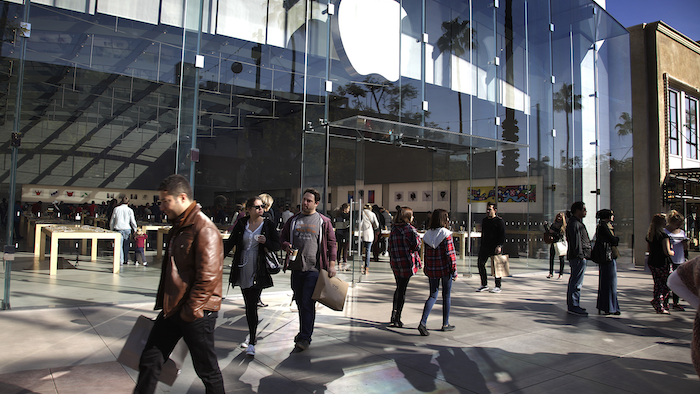 SAN FRANCISCO (AP) — Apple CEO Tim Cook says consumer demand for new iPhones has been "staggering" and "hard to comprehend." That helped the company report record-smashing earnings for its latest quarter and primed its stock for a rally Wednesday.

But after selling a record 74.5 million iPhones in three months that ended in December, what can Apple do next?

Some analysts worry that Apple depends too much on the iPhone, which contributes two-thirds of its sizable revenue — leaving the company vulnerable if some other gadget comes along to replace the iPhone in popularity. Cook and Chief Financial Officer Luca Maestri, however, say they're optimistic about other products in Apple's portfolio. Here's some of what they talked about on Tuesday.

Apple plans to start selling its highly anticipated smartwatch in April, Cook told analysts on a conference call after the company's earnings report Tuesday. He added that developers are working on new apps called "Glances" — apparently in reference to the way people will view those apps on their wrists.

Cook boasted he's already wearing and enjoying an early model. "I'm using it every day and love it and can't live without it," he said.

Still, some analysts say it's difficult to predict demand for the Apple Watch. "We continue to believe interest from consumers is tepid," said Piper Jaffray's Gene Munster in a recent note to investors.

Apple introduced its digital payments service last fall, but Cook vowed Tuesday that "2015 will be the year of Apple Pay." He said 750 banks have signed up for the program, which now accounts for two out of every three dollars spent through so-called "contactless" payment systems, as opposed to credit cards that are swiped at the point of sale.

While Apple is believed to collect fees from banks when shoppers use Apple Pay, it doesn't specifically disclose revenue from the service. BGC Partners analyst Colin Gillis says he doesn't expect the program will make a "material" contribution to Apple's revenue in the near future.

Apple said sales of Macintosh computers were up 9 percent in the last quarter. The company increased its share of the personal computer market at a time when overall PC sales were declining. Apple no longer reports separate numbers for its iPod music players.

But iPad sales fell 22 percent. Even so, Maestri said surveys show consumers love iPads for web-browsing and shopping, and he said new apps produced in partnership with IBM will increase business uses for the devices. The iPad has "a very bright future," Cook added, although he cautioned he doesn't expect sales trends to change in the next couple of quarters.

Apple says iPhone sales doubled in China, Brazil and Singapore in the last quarter, despite aggressive competition from South Korea's Samsung and the Chinese companies Huawei and Xiaomi. Cook also boasted the company saw record rates of first-time iPhone buyers and former owners of Android phones who are switching to Apple devices, although he didn't provide specifics.

Overall, Apple reported $74.6 billion in sales and $18 billion in profit for the December quarter, which represents a year-over-year increase of 30 percent and 38 percent respectively. Based on those numbers, analyst Bill Kreher of the Edward Jones investment firm said he'll be raising his forecasts for the company's performance this year.

Even so, he added, as Apple keeps setting records, "it's certainly going to be more difficult for them to continue to beat expectations."