A company that has flown unmanned capsules to the Space Station unveiled a spacecraft designed to ferry up to seven astronauts to low-Earth orbit that SpaceX founder Elon Musk says will lower the cost of going to space. 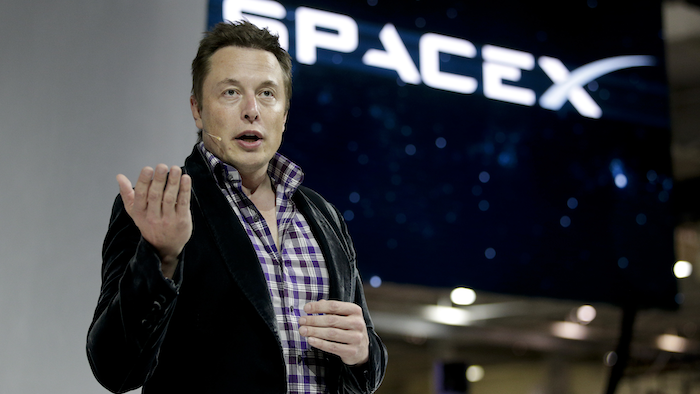 HAWTHORNE, Calif. (AP) -- A company that has flown unmanned capsules to the Space Station unveiled a spacecraft designed to ferry up to seven astronauts to low-Earth orbit that SpaceX founder Elon Musk says will lower the cost of going to space.

The futuristic, cone-headed craft dubbed Dragon V2 featured landing legs that pop out and a propulsion system designed to land almost anywhere "with the accuracy of a helicopter," Musk said Thursday at the Southern California rocket builder's headquarters near Los Angeles International Airport.

The technology would enable rapid reloading and reusability of the spacecraft, he said. He noted that in the past, many rockets and space craft return to Earth in a fireball, rendering them unusable.

"You can just reload, propel it and fly again," Musk said. "This is extremely important for revolutionizing access to space because as long as we continue to throw away rockets and space crafts, we will never truly have access to space. It'll always be incredibly expensive."

"If an aircraft is thrown away with each flight, nobody will be able to fly or very few (can)," he said. "The same is true with rockets and spacecraft."

The capsule also features a bright, sleek interior with swing-up computer screens at the control station, a two-level seating system to accommodate up to seven astronauts and large windows for them to marvel at Earth's curvature. The cone-shaped cap can open to allow for the manned craft to dock at the Space Station on its own. The spacecraft also has more powerful engines, better heat shields, the landing legs and backup parachutes to ensure a soft landing.

In a NASA briefing with reporters last year, Musk said Dragon V2 would look futuristic like an "alien spaceship" and promised "it's going to be cool."

Since the shuttle fleet retired in 2011, NASA has depended on Russian rockets to transport astronauts to orbit and back, paying nearly $71 million per seat. The space agency has said it wants U.S. companies to fill the void by 2017 and has doled out seed money to spur innovation.

SpaceX — short for Space Exploration Technologies Corp. — has made four cargo runs to the giant orbiting outpost some 200 miles above Earth. Just last month, its Dragon capsule splashed into the Pacific, returning nearly 2 tons of science experiments and old equipment.

Companies competing for the right to ferry station astronauts need to design a spacecraft that can seat a crew of four or more and be equipped with life support systems and an escape hatch in case of emergency. SpaceX has said it's designing a seven-seat spacecraft.

SpaceX and longtime NASA contractor Boeing Co. are "more or less neck and neck" in the competition, but there's a long way to go before astronauts can rocket out of the atmosphere on private spacecraft, said John Logsdon, professor emeritus of political science and international affairs at George Washington University.

Logsdon said progress by private companies is slower than anticipated mainly because Congress has not fully funded NASA's budget request for the effort. He said it's important for the U.S. to wean its reliance on Russia given the political tension over the annexation of Crimea.

"It's essential to have our own capability to transport people to space," he said. "This is an important step in that direction."