Ellison Steps Aside As Oracle CEO

Oracle co-founder Larry Ellison is stepping aside as CEO after 37 years at the helm of the business software maker, ending a colorful reign marked by his flamboyant behavior and outlandish wealth amassed while building one of the world's best-known technology companies. 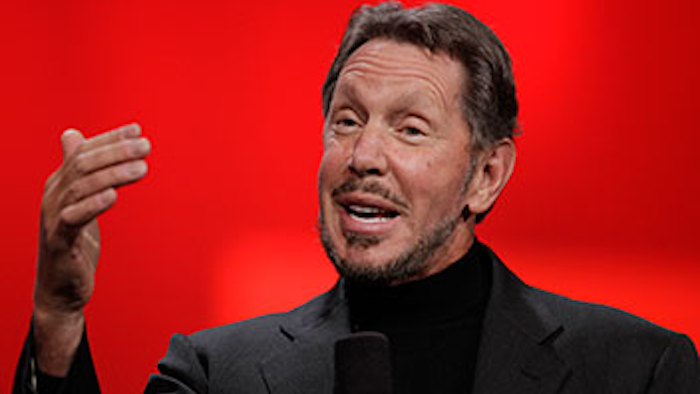 SAN FRANCISCO (AP) — Oracle co-founder Larry Ellison is stepping aside as CEO after 37 years at the helm of the business software maker, ending a colorful reign marked by his flamboyant behavior and outlandish wealth amassed while building one of the world's best-known technology companies.

With the changing of the guard announced Thursday, Ellison will be handing over his job to his two top lieutenants, Safra Catz and Mark Hurd, who become co-CEOs.

Ellison, 70, intends to still play an influential role at Oracle Corp. He is taking over as Oracle's executive chairman, replacing Jeff Henley in the position, and will oversee the engineering departments as chief technology officer. What's more, Ellison remains Oracle's biggest shareholder with a 25 percent stake in the Redwood Shores, California, company that accounts for most of his $51 billion fortune.

Catz, Oracle's chief financial officer until Thursday, will be responsible for manufacturing, legal and finance, while Hurd will supervise sales and all services. Both of them will report to Oracle's board instead of Ellison. Oracle isn't hiring a CFO to replace Catz.

Given that Catz and Hurd are already handling many of the same duties as Oracle's co-presidents, the new pecking order may not seem like much of a change, especially among investors who worried about the company's sluggish growth in recent years.

Oracle's stock slipped 86 cents, or 2 percent, to $40.69 in Thursday's extended trading following the company's announcement. The downturn may have had more to do with Wall Street's disappointment with Oracle's fiscal first-quarter earnings, which were also announced late Thursday and missed analyst targets, than with the reshuffling of management duties.

The shake-up comes at a critical point in Oracle's history. It is trying to adapt to the technological upheaval that is causing more of its corporate customers to lease software applications stored in remote data centers instead of paying licensing fees to install programs on machines kept in their own offices. The shift to Internet-connected software has become known as "cloud computing."

"While there was some speculation Larry could step down, the timing is a bit of a head scratcher in our opinion and the Street will have many questions," said FBR Capital Markets analyst Daniel Ives.

Although Ellison has steadfastly insisted that Oracle is well positioned to sell more cloud computing services, smaller rivals such as Salesforce.com Inc. and Workday Inc. have been growing at a much faster clip. Both Salesforce, started by former Oracle executive Marc Benioff, and Workday, founded by longtime Oracle nemesis David Duffield, were created explicitly as cloud computing specialists.

In a post on his Twitter account, Benioff cast doubt about whether Ellison is really relinquishing any control. "There always has been, and always will be, one CEO at Oracle," Benioff tweeted.

Since he co-founded Oracle with $1,200 of his own money in 1977, Ellison has become has well known for his antics away from the office as his accomplishments as the company's CEO.

Through the years, Ellison has driven fancy cars, flown his own jet, raced yachts, wooed beautiful women and owned ornate homes in San Francisco, Malibu and an exclusive Silicon Valley neighborhood, where he spent $170 million on a 45-acre compound designed to remind him of Japan and the samurai warriors that he admires. In 2012, he bought his own Hawaiian island by acquiring 98 percent of Lanai.

Last year, Ellison staged the boating race for America's Cup in the San Francisco Bay, where a team of professional sailors that he personally financed won the trophy for the second straight time.

Ellison, a close friend of late Apple co-founder Steve Jobs, has always relished his status as the richest person in the nation's high-tech heartland, where free-flowing stock options sometimes turned receptionists and cafeteria workers into millionaires. Money is "a method of keeping score," Ellison once told an interviewer.

Catz, 52, is a former investment banker who joined Oracle in 1999. Hurd, 57, has been with Oracle for four years, but is best known the former CEO of Hewlett-Packard Co.

Hurd stepped down from HP in 2010 after that company's board raised questions about his expense reports and his relationship with a company contractor.

Ellison ridiculed HP for its treatment of Hurd, a close friend, and hired him at Oracle.

"Safra and Mark are doing a spectacular job and deserve the recognition of their new titles," Ellison told analysts Thursday.

Bayer To Split Off Polymer Division

Over Half Of U.S. Companies Project Increased Energy Efficiency In 2015